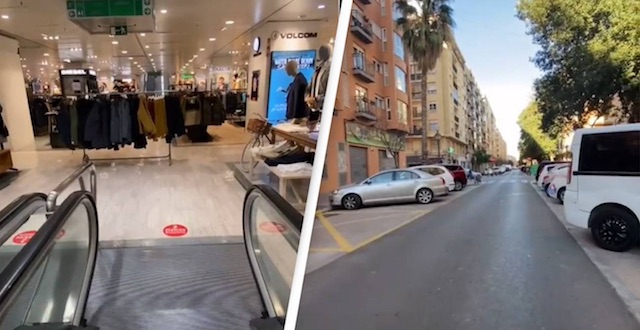 Remember a couple of years ago where loads of videos of people claiming to be time travellers from the future went viral for some reason? People really couldn’t get enough of that shit, then they (thankfully) just kinda stopped.m

Anyway, I’m not sure why but it looks like they might be coming back around again after a guy called Javier went viral on February 13th after he posted a TikTok where he claimed that he had travelled six years into the future. It was pretty spooky as well because he said that the human race was now extinct and tried to prove this by filming himself walking around an empty city of Valencia and going inside an empty clothing store.

Since then he’s regularly posted videos of him walking around with nobody else in them to his 1.2 million followers, although interestingly electricity and an internet connection seem to be available to him and if the human race really was extinct you would have to wonder why they still existed. Anyway, take a look at a couple of them below:

That is kinda creepy/chilling but I’m sure he could just use a computer to edit all the people out and it wouldn’t be that difficult with the technology available these days? The ones on the beach look like there were footprints in the sand anyway already.

Gotta say that the videos are cool and it’s a pretty neat idea even if it is obviously fake. Hope the guy is promoting a new movie or trying to get a job as a special effects guy and ends up getting it because of them.

For more of the same, check out this video of a time traveller from 2118 talking about why he can’t buy a lottery ticket and become a millionaire. Very disturbing.