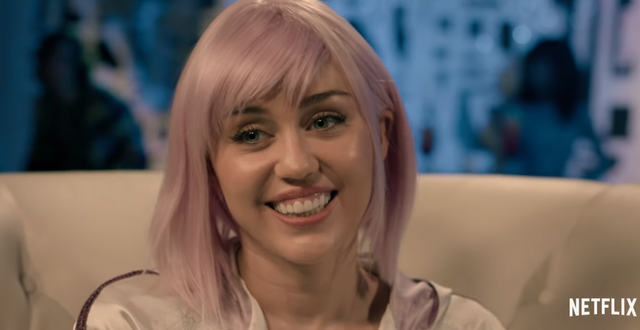 How TV ruined your life.

Today is an exciting one if you’re into dystopian TV, as three new episodes of Charlie Brooker’s Black Mirror just dropped on Netflix.

One of those episodes centres on a character portrayed by none other than pop singer and former Hannah Montana star Miley Cyrus. Titled ‘Rachel, Jack and Ashley Too’, she portrays a pink-haired version of herself whose shiny star appeal isn’t quite as rosy as it appears.

It’s safe to say that Cyrus does a fantastic job in the role. However, this is made slightly awkward by a throwback clip from the writer’s series How TV Ruined Your Life in which he rips into Cyrus in typical Brooker fashion. In the clip, he says:

The pioneering queen of tween role models is Hannah Montana, a wise cracking, warbling smart arse played by Miley Cyrus – who is perhaps the only convincing argument I’ve ever seen for China’s unofficial policy of discarding female infants at birth.

No holding back there. Although anyone who watched the show will know that he never did.

Either the pop star didn’t catch wind of this rather brutal roasting or she saw the funny side in it. Even she can probably admit that she did some dumb shit on her rise to fame – it’s part and parcel of being a celebrity these days.

Also, if someone told Brooker back then that he’d be booking the former Disney kid as the lead actor in one of his shows, he probably would’ve spat his bitter tea in their face. It’s an unlikely collaboration, but one that’s turned out pretty damn good.

For more on the new season of Black Mirror, click HERE.