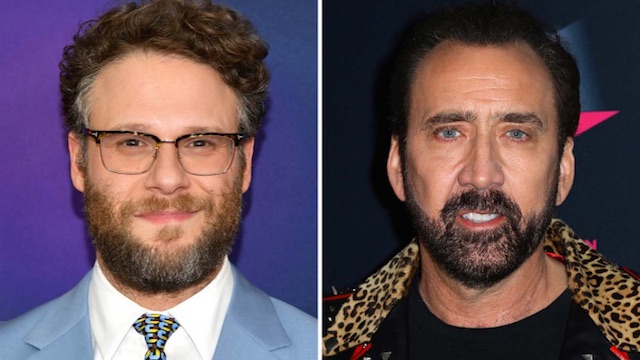 By all accounts Nicolas Cage is one of the weirdest people in Hollywood, so it’s not really that surprising that Seth Rogen has a really stupid story about when he met him.

Rogen was appearing on Howard Stern this week when he decided to share the tale, which came about because Cage was interested in a role in Rogen’s 2011 movie ‘The Green Hornet’. Unfortunately it didn’t end up working out between the two of them, but the details of their meeting have to be heard to be believed:

He told us that he wanted his character to be bald with tattooed hair.

And we were like, ‘Okay…’ We were kind of wrapping our heads around it.

And then he calls us back a few days later to tell us he changed his mind about it because he was considering doing it in real life.

And I remember laughing hysterically when he said it on the phone, and then stopped, realizing it wasn’t a joke.

He also wanted his character to be a white Bahamian man and this led to a meeting at Sony chairwoman Amy Pascal’s house.

“Literally within 60 seconds, we were all seated at the house as he stands in front of us reciting a monologue, talking in a Jamaican accent.

[His] monologue was not in the script.

Nor did it have anything to do with the script.

At which point I was like, ‘I don’t think he’s even read the script.’

When he had finished he acted like he had just completed a backflip and he’s waiting for the applause.

At which point everyone looks to me to express the group reaction.

Then when we all sat down for dinner, he almost right away he just gets up and leaves.

Wow. If ever there was an encounter that was more on brand than that one then I would love to hear it? This isn’t actually the first time I’ve heard about this ‘character’ that Nicolas Cage seems to have come up with either so I know it’s true too. Just what the hell is Cage thinking with anything that he’s doing in this story? He truly is a depraved maniac.

Apparently Cage once left James Franco answerphone messages accusing him of stealing the concept off him for ‘Spring Breakers‘. What a completely weird thing to do.