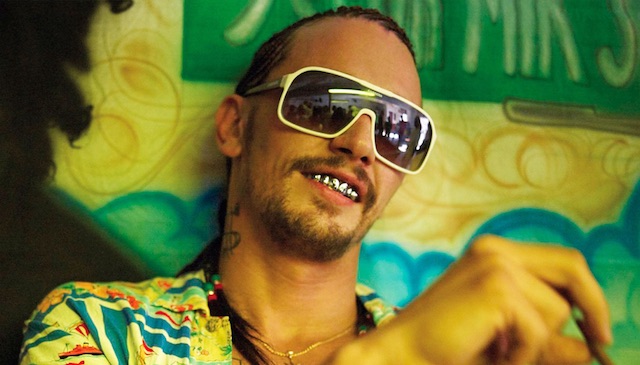 This is such a Nicolas Cage story.

Nicolas Cage only seems to get weirder as he gets older and here’s another example of that, as he’s accused James Franco of stealing his idea for the iconic character of Alien in 2012’s notoriously offbeat trash fest ‘Spring Breakers’.

Bizarrely, it was Seth Rogen of all people who brought Cage’s theory to the masses, revealing it all in a recent interview with GQ. Rogen said that he had discussions with Cage whilst filming ‘The Green Hornet’ about the possibility of him playing Benjamin Chudnofsky – a part that eventually went to Christoph Waltz.

Here’s what Rogen had to say:

He wanted to play a ‘white Bahamian’ with a thick Caribbean accent.

A bald man with hair tattooed on, large prosthetic lips and a voice like Edward G. Robinson.

He actually reached out to me last year to see if I shared the idea because he seemed convinced that Franco stole the idea for ‘Spring Breakers’.

I told him that I hadn’t and there weren’t too many similarities between the two characters.

Lol? I’m not sure who Edward G. Robinson is, but Alien had cornrows and wasn’t bald and I don’t think he had large prosthetic lips either so there’s definitely two differences immediately off the bat. Also really weird that Cage would reach out to Rogen eight years after the movie was released to answer this question. Had he just not seen it or was he stewing on it and building up the guts to ask Seth? Very weird behaviour, but then again do we expect anything less from Cage at this point.

For more of the same, check out the new movie Nicolas Cage is starring in where he plays Nicolas Cage. What the heck?