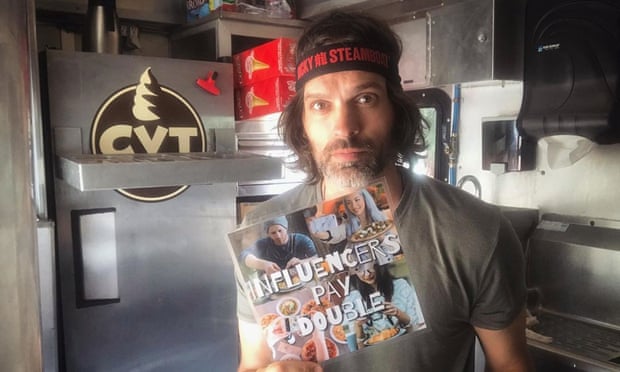 Even if you absolutely detest and despise it, you can’t really deny that we’re currently living in a world dominated by social media and the influencers that sit at the top of the food chain amongst the various social networks. This is just what the world is like now unfortunately.

One guy who isn’t having it though is Joe Nicchi, who runs an ice cream truck in Los Angeles called CVT Soft Serve – the CVT stands for Chocolate, Vanilla or Twist, the three flavours that he serves out of the truck. As the truck he bought to run his ice cream business out of is very ‘Instagrammable’ because of its vintage looks, ever since he started his business last year he’s been bombarded with requests for free ice cream from influencers in exchange for posts on their various networks.

Nick has always said no, but this week it all got a bit too much for him and he decided to put up a sign insisting that influencers paid double for their ice cream cones. This inadvertently meant that he himself went viral and kinda became everything that he despised, although it’s slightly different because at least he’s doing it for a good cause.

Speaking to The Guardian, Nick said the following about his newfound fame:

We’ve decided to make this thing official with signage. We truly don’t care if you’re an Influencer, or how many followers you have. We will never give you a free ice cream in exchange for a post on your social media page. It’s literally a $4 item…well now it’s $8 for you. #InfluencersAreGross

It’s weird … but I think it’s really fun. I hope it inspires small businesses to hold their own and tell people to fuck off.

They love using the word ‘exposure’. It’s so ridiculous.

This is a money-making thing. I can’t give away my ice-cream for free.

There’s something so redeeming about outing influencers.

I hope that more people do not allow likes and comments and followers to hold weight in the business. I want people to go to a restaurant because the food and service is fantastic.

If Instagram went away tomorrow, our truck would still survive. I don’t know that your ‘influencer’ business would.

I mean fair play to the guy because he’s talking a lot of sense and is managing to spread the word about influencer culture, even if it is a bit ironic that he’s kinda ended up becoming what he hated. Kinda.

Viral fame has indeed had its benefits as well, as Nick’s also revealed that he’s doubled his amount of customers and thousands more people are now following him on Instagram. I guess viral marketing really does work – just maybe do it yourself and don’t let an influencer decide that.