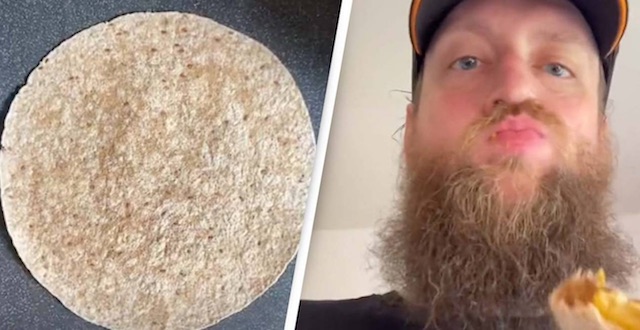 When it comes to breakfast, then there’s only really a few traditional options that you can go for – cereal, toast, maybe a full English if you’re treating yourself – and so when you see something like the monstrosity that this guy on TikTok has prepared then you really have to question just what the hell is wrong with the guy in question.

The dude’s name is Hairy Spice – probably already a bit of a red flag – and he decided to fill up a breakfast wrap for his breakfast, but it isn’t like any breakfast wrap that you’ve ever seen. Hairy first slathers the tortilla with Marmite, before adding in mustard, tabasco, cayenne pepper and chilli flakes which sounds OK until he adds an unpeeled banana into the mix.

He then finishes his video by wolfing it down:

Geez. That did not look good at all did it? I can’t imagine that there’s any way that those flavours compliment each other even slightly and even if they did, the fact that he’s put in an unpeeled banana in there as well negates everything anyway because that’s just going to be completely rank. Who the heck even thinks to eat the banana peel? Freak.

For more of the same, check out these deep fried spaghetti burgers. What the heck are they about?