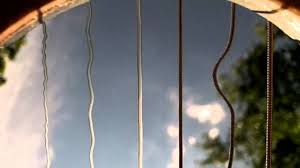 Probably one of the coolest things I’ve ever seen.

Despite all the times that I’ve played guitar or watched someone play guitar, I’ve never really considered what the strings actually look like when you’re playing them.

This guy had the bright ida to film himself playing Metallica’s ‘Nothing Else Matters’ and filming it from inside the acoustic guitar he’s playing it on on his phone. And honestly, it’s one of the coolest things I think I’ve ever seen and absolutely blows my mind. Check it out:

Yep, that looks totally dope doesn’t it, especially against the backdrop of the clouds, right? I suppose the vibrations and oscillations in the strings are the equivalent of frequencies of the notes that are being played or something, but I wasn’t very good at physics so can’t say that for sure, I just know that it looks absolutely awesome, especially to such a haunting song.

For more Metallica and more ‘Nothing Else Matters’, check out what it sounds like when it gets transposed to a major key.