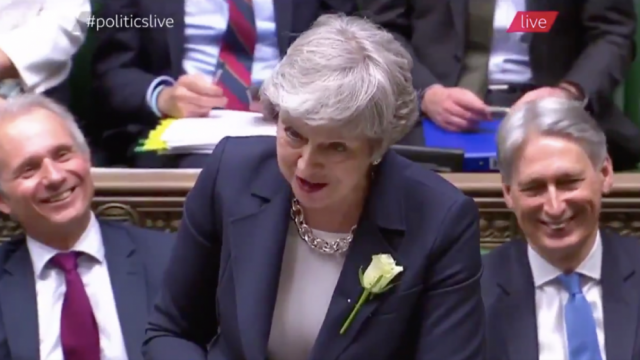 The absolute state of this.

It’s been a month or so since the deadline for us leaving Europe was extended until Halloween, so we’re not constantly hearing about Brexit negotiations every single day, but this latest analogy was so cringeworthy that we just had to highlight it.

During the latest instalment of Prime Minister’s questions – which is basically just two people slagging each other off in more and more creative ways before an audience that laughs and boos their every move – Jerem Corbyn wondered if Theresa May could look to Jurgen Klopp for tips on how to secure a good result against European opposition. So far, so good and you know, fairly funny from Corbyn.

May unfortunately decided to continue the football analogy in her response though, offering the following cringeworthy comparison:

Jeremy Corbyn: "Perhaps the PM could take some tips from Jurgen Klopp on how to get a good result in Europe?"

Theresa May: "Look at Liverpool's win over Barcelona, what it shows is when everyone says it's all over… we can still secure success"https://t.co/ruUUU4D1HE #PMQs pic.twitter.com/t9PDOrPYgo

When we look at the Liverpool win over Barcelona last night, what it shows is that when everyone says it’s all over, when your European opposition have got you beat, the clock’s ticking down and it’s time to concede defeat, actually we can still secure success if everyone comes together.

I mean I suppose she does have a point there because most people had written Liverpool off before the tie, but I think these Brexit negotiations are a bit different from a football match for a multitude of reasons. I hope that she’s correct and she can sort it out, but I think everyone foresees it just dragging on and on forever, with nothing ever getting sorted and the UK either leaving with a shitty deal or never leaving at all. Prove me wrong though Theresa, prove me wrong.

For more of the same, check out Theresa May in another cringe video explaining what’s going on with Brexit. Awful.