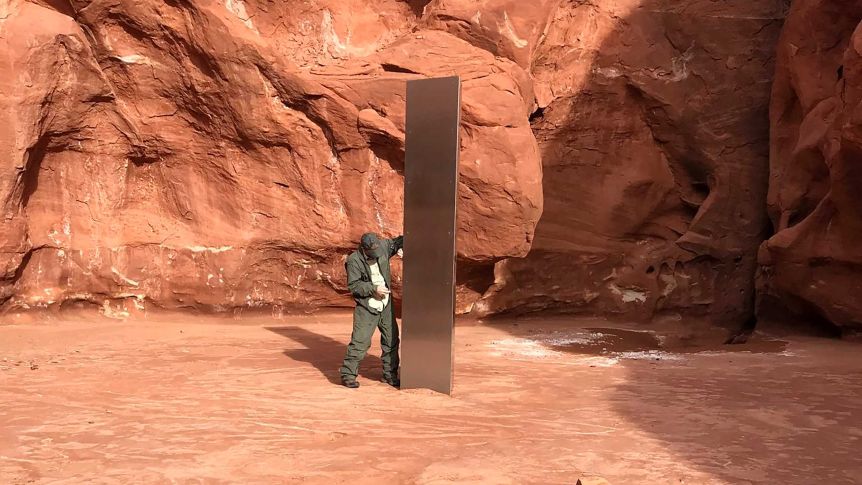 There was a brief respite from the doom and gloom of 2020 yesterday when a weird metal monolith was discovered in the middle of the Utah desert and nobody had any idea where it had come from – with some even fearing it was alien technology.

Of course, that seems unlikely but now more and more theories are emerging about just what it might be doing there. The first name that came up yesterday was that of artist John McCraken – who was known for his construction of plank like structures – and his gallerist David Zwirner has now broken his silence, telling the New York Times that he definitely believes that John was responsible for it.

However, McCracken passed away in 2011 so he can neither confirm or deny his involvement and interestingly a Reddit user named Tim Slane believes that he’s located the monolith on Google Maps dating back to 2016. He can’t see the structure on Google Earth in 2015 and 2013 though, which would imply that it was built after McCraken’s death in 2011. So that sorta rules him out if the Google Maps are believed.

Other internet users have compared the installation to the work of Petecia Le Fawnhawk, who is famed for placing unusual sculptures in remote locations. She has denied any involvement, saying that she had thought about placing a sculpture in the desert in the past but that this definitely wasn’t anything to do with her. Mysterious.

Seems like the enigma will remain unexplained for a few days at least, although I can see someone off Reddit or 4Chan figuring this out sooner rather than later. Internet detectives are just so great at cracking the case, you know?

Also, you’ve gotta think that whoever’s behind it is just sitting there rubbing their hands with glee over how everyone is trying to figure it out and it’s blowing up all over the world. If they’re still alive/of this planet that is of course.

For more of the same, check out this weird burning spacecraft recently filmed in the Dominican Republic. Or at least that’s what people are saying it is.