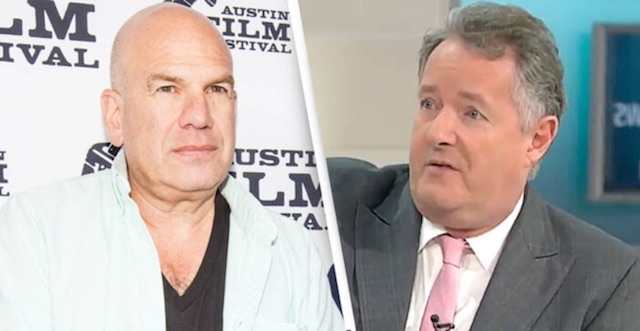 We’ve already talked about how Piers Morgan gave his first interview since leaving ‘Good Morning Britain’ yesterday on Fox News with Tucker Carlson and how he unsurprisingly doubled down on his claims that Meghan Markle was a liar, but what we haven’t mentioned yet is how he got into a massive slanging match with the creator of ‘The Wire’ David Simon immediately following it.

You don’t really need any context for this so let’s just dive right in hey:

In an ocean of talking-head sewage, what are the chances that the two most pouty and puckered assholes in broadcast television would ever swim through the brown, find each other, and discuss the events of the day? https://t.co/m0Yf9do7Bo

Talking of sewage, Dave… you were all over me like a sycophantic chap rash when I interviewed you. Yet now you play the vicious horrible illiberal liberal to appease your vile woke base. All a bit sh*t really. But on a positive note, I loved The Wire. https://t.co/h2KOWSQ5Uw

Aaron was a class act. You…. not so much. Probably explains why The West Wing is so much better than The Wire.

Sorkin is swell and has gigs. I’m still working for Time Warner after a quarter century. You’re unemployed and if it was a Tijuana cathouse and you had a fistful of fifties, you still couldn’t get laid at TW or anywhere else over here. Not after that pratfall you did at CNN. https://t.co/DCQkIb0dmt

*hack* Apologies, and that replaces the word “back” and not “parasite” though it could work there as well, certainly.

Wow. He really didn’t hold back there did he, although it gets a bit embarrassing where he starts dissing people’s mothers after they’ve tried to defend Piers. Here are a couple of them that kinda made me lol before I remembered a 50 year old man had written them:

Your mother made a man of me. Thank that relentless, uninhibited woman for all the confidence bestowed. https://t.co/EN4D8j7DtL

Regrettably, your mother wore her high boots and that crotchless number. Tomorrow, perhaps, but I appreciate your concern. https://t.co/SV7XOOfZyL

Yeah, no one wants to be caught dead making HBO dramas for a quarter century. Dead-end gig, that. As to cathouses, Mikey, you’d do well to show a little respect for that worthy labor given how often you come up from the basement to take my money from your mom’s purse. https://t.co/QO7ZKsawVT

Errr. I don’t really know much about David Simon other than that he made ‘The Wire’ and a couple of other television shows, but his bio says that he’s ‘the angriest man in television’ and this kinda backs it up. Always love to see Piers Morgan get ridiculed though so gotta give Simon the W on this one. Nice one pal.

Hopefully this isn’t the last we hear in their feud because both of them seem to enjoy giving it out to each other. Can see it becoming even more entertaining to be honest.

For more of the same, check out Morgan getting a cream pie thrown in his face. Still funny.