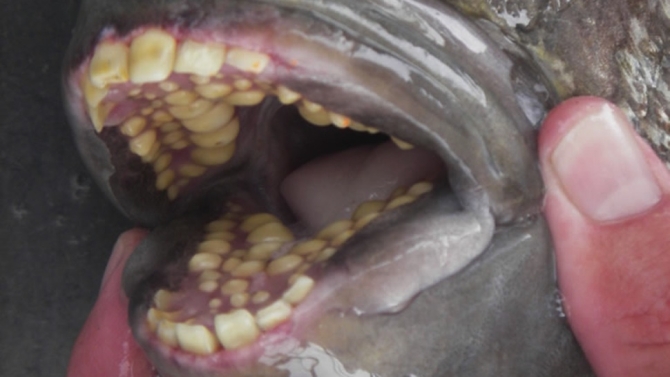 Sick Chirpse unearths a creature of the deep that seemingly exists for the sole purpose of giving you scary dreams. WARNING: Do not read before bedtime.

I was very little when I first saw Jaws and it left me a damaged wreck for years on end. Anytime I’d have a bath I would only fill it up to my ankles because my silly child brain was convinced that were the water any deeper, then that was an open invite to any Great White to materialise in my tub and gobble me up like that poor kid in the film who gets munched after he goes out for a paddle. I have since made my peace with both sharks and the concept of them invading my bath tub, but last week I stumbled upon an image of marine life so utterly horrifying that it makes Jaws look about as menacing as Free Willy. 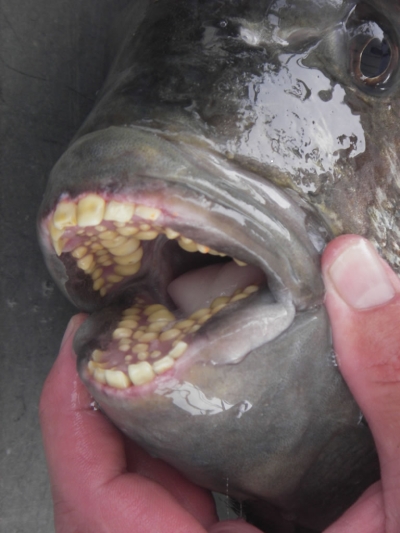 What you see is not something from a Guillermo del Toro movie about fascist man-fish in Spain during the 1930’s but an actual living, breathing entity known to the more scientifically-inclined as ‘Archosargus probatocephalus’. I thought that was Latin for ‘Holy Fucking Christ What The Shit Is That Thing KILL IT WITH FIRE’, but it turns out that as far as laymen like you and I are concerned, we can call it the Sheepshead.

It was named after the Sheepshead Bay area of Brooklyn, New York  but mainly lives around the mid-Atlantic. The Sheepshead’s party piece is a horrifying set of human-like teeth at the front of its mouth, backed by a revolting assortment of stubby specimens so that it can fuck with your shit just that little bit more. Also, the skeletal version looks like The Vagina From Hell. 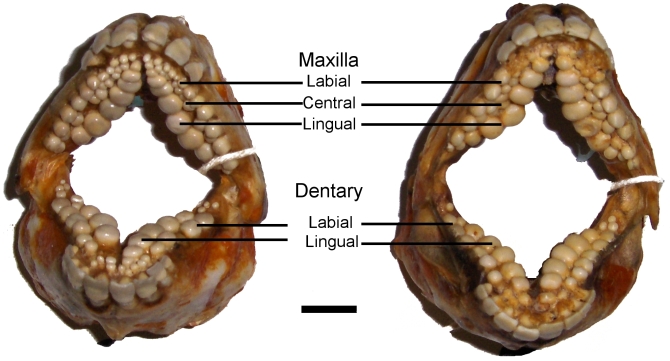 The reason the Sheepshead has such a truly terror-inducing set of dental hardware is due to its eating habits. The fish lives on a delicious seafood diet of clams, oysters, crabs and other crustaceans, and without the aid of one of those nutcracker thingys that people use when they eat lobster in plush restaurants, the Sheepshead must utilise its impressive-but-shit-scary mouth to BITE DOWN ON and CRUSH the hard exoskeletons of its sea-dwelling neighbours. It also grows up to 30 inches. Fuck me, imagine going for a delightful swim only to have one of these bastards swim up to you and go straight for your groin. It would be a lot worse than this;

Apparently, the Sheepshead is easy to catch off American waters and tastes delicious (though it has a poisonous cousin). Be that as it may, I’m taking extra care in the water from now on. Sharks are one thing, but at least they have normal, upstanding shark-looking teeth unlike this mutated monstrosity. This is The Thing That Should Not Be. Pleasant dreams. 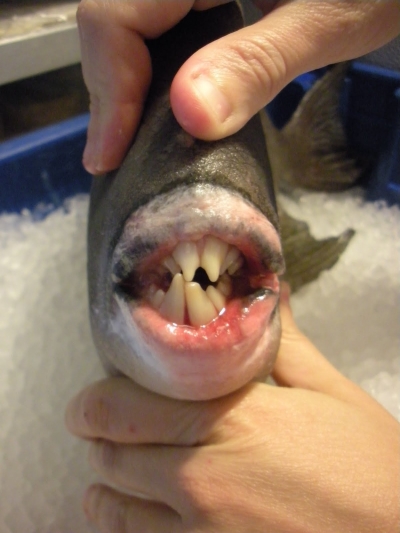