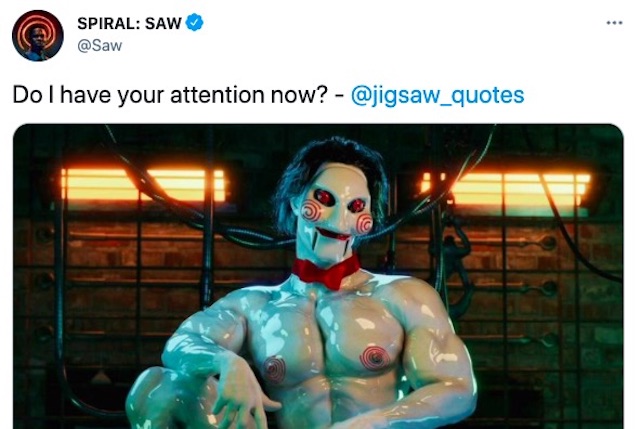 What the fuck is this?

I think most people are probably aware that there’s a new ‘Saw’ movie coming out starring Chris Rock and Samuel L. Jackson as they’ve been hyping it up for over a year because of the pandemic, but just in case you hadn’t heard about it whoever is in charge of their social media accounts has decided to go completely crazy and tweet out a really weird picture of Billy The Puppet being really buff.

Feast your eyes on this:

What the fuck is all that about? I really hope that isn’t an image from the movie and is just something weird that they tried to do to get attention – which is exactly what they got. Check out some of these reactions:

Yeah safe to say that didn’t go down too well, but I guess there’s no such thing as bad publicity. I was already pretty stoked for the new ‘Saw’ movie, I imagine that there are some people who somehow didn’t know about it though who might have it on their radar now thanks to that truly awful monstrosity. Props to the guys in creative for ‘Saw’ I guess.

For more of the same, check out the final trailer for ‘Spiral: The Book Of Saw’. It does look pretty good.