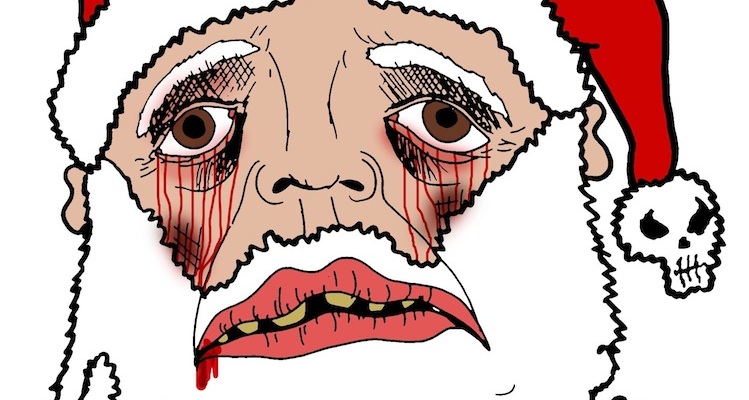 The light is fading, the Christmas lights are up, the frost creeps from the shadows but the festive season is not all as it seems. Something stirs in the half-light… 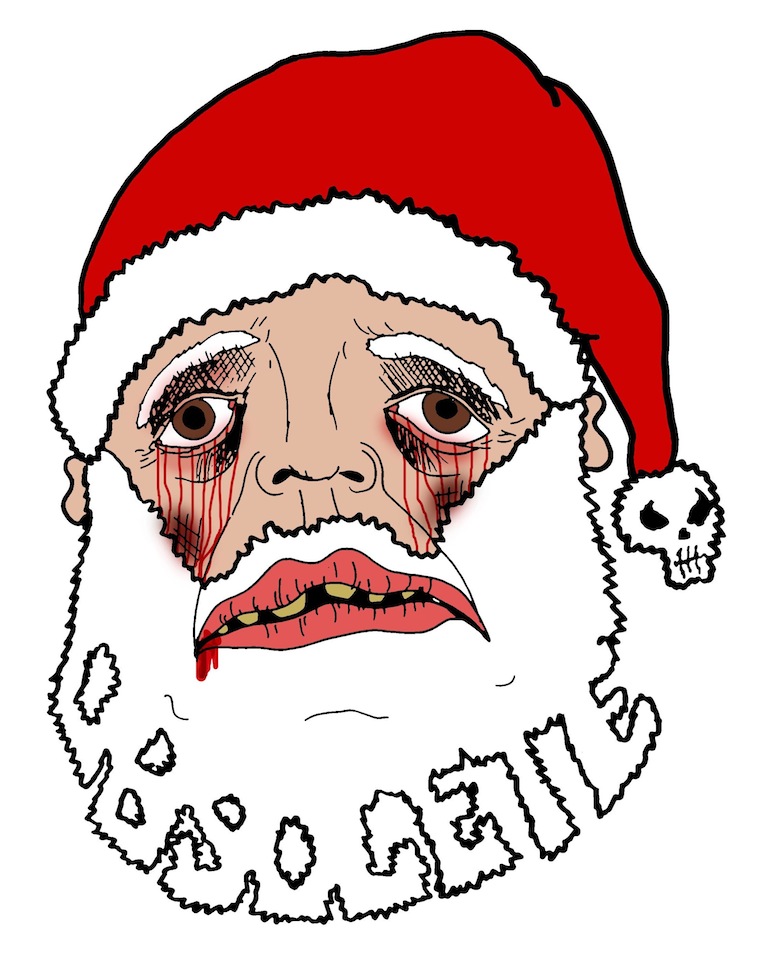 The light is fading, the Christmas lights are up, the frost creeps from the shadows but the festive season is not all as it seems. Something stirs in the half-light…

‘Twas the night before Christmas, and all round the house’,
Only one creature stirred, but it wasn’t a mouse
But a Figure first ghostly, now stands in the fire light,
Casting shadows in halftone with an unholy plight

His blood-red stare matches stockings on walls,
Obsolete Christmas cards hang themselves in the hall,
The night, black as coal, holds horizon at pause
The brilliant white snow covers windows and floors.

The Figure now moves, aware of his task,
With the silence of whispers, and now free at last,
The cold winters night chills blood and stands hairs
But to the Figure means nothing, and so holds a fixed stare.

Now cautious, at first, takes a pace forward or three,
Snow crunches underfoot,  from the lights of the tree,
He can make out a man in unconventional hue,
A tri-coloured fellow, of which there are only a few.

The Figure moves forward, out into the white,
His pupils dilating, yet hating the bright,
For this Figure of noir finds rest in the night,
But cannot retract gaze from the man in his sight.

The pair both meet eyes across glitter-touched snow,
The trees all stand solemn, the house windows a-glow,
The Figure silhouetted, is hidden from view,
The mans eye widen, like a nightmare renewed.

“Hello, who are you”, the man bellows and shouts,
With optimistic tone but voice shaking with doubt,
The Figure stands grinning and remains statue still,
No word on his lips, no evidence of the chill.

The man pulls up his collar as the wind whips through the trees,
The sack on his back is lifted with ease,
“Who are you”, again, “what do you want please”,
But hears only one word carried faint on the breeze.

The man in the 3 coloured, collared three piece,
Turns away from the Figure and back onto piste,
His black boots trudge on, but hail a cruel twist,
(did i mention the snow lay deep, even and crisp?)

The man turns expecting to see the Figure still there,
But this mysterious Figure’s vanished into thin air,
With a shake of his head from the shock of the scene,
Like he’d just woken from an unfinished dream.

He now walks swiftly, dressed in black, white and red,
To a group of reindeer, and eponymous sled,
‘So up to the house tops, the courses they flew’,
the night falls silent and the snow starts anew. 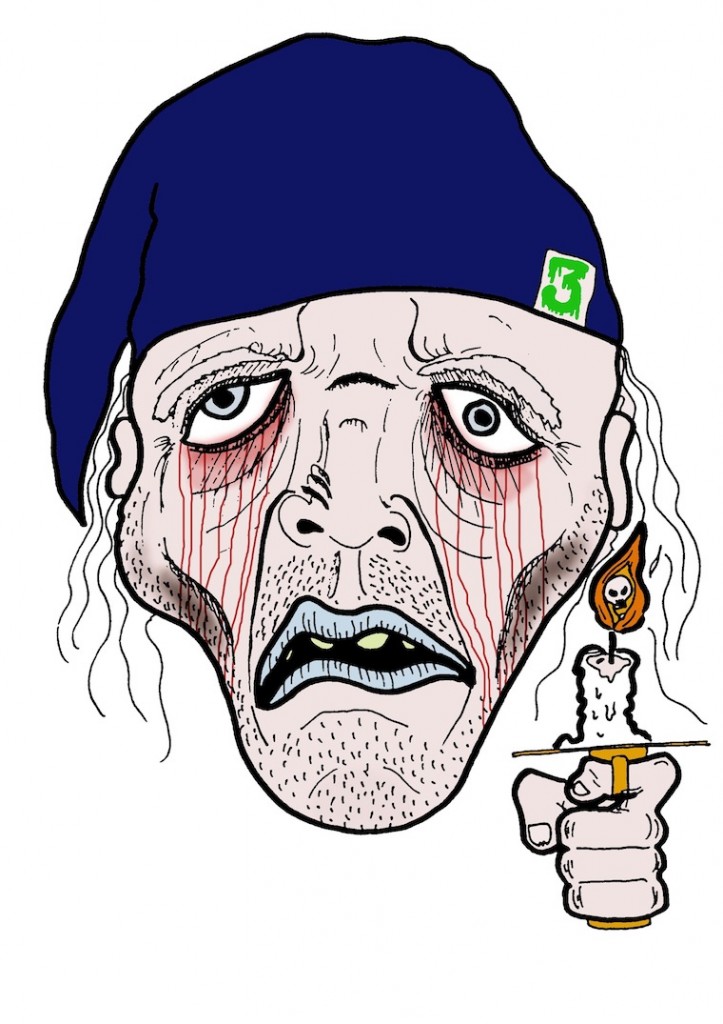 The Figure now finds himself standing,
In a snow covered street dimly lit,
Where cobbles sit frozen on pavements,
And street lamps pierce the mist.

Yuletide harmonies drift on the air,
As the cold grips fingertip ends,
the Figure is drawn to a warn winter scene
where family makes marry with friends.

What is this light celebration?
What meaning is held by the tree?
Why does this Figure stand as if shocked,
his darkness succumbing to glee?

As he turns on his heels, The Figure is gone,
but no footsteps puncture the snow,
and above where he stood, a man leans out
his face beaming and filled with a glow.

“Young sir, buy a turkey, the biggest in town!’
his voice resonates through the street,
to a small boy in wonderment, who runs away laughing
to purchase the festive foul feast.

The man from the window, still smiling,
turns and dons a top hat and coat,
The Figure now hovers at the end of the bed,
as if looking for something to note.

Three apparitions fade into corners
The Figure meets eyes with the first,
a small blonde spectre, the second a man,
the third cloaked as black as a hurst.

But now they take leave through a side wall,
No door, no lock, no ratchet,
the man from window now bursting with joy,
exclaims “God bless you dear boy, Mr Cratchet!”

A question arises, to the Figures surprise,
what events are left to unfold?
This man once miser now muses in merriment
ready to tell stories of old.

The Figure follows the gent from his bedroom,
the cobbles now wrapped up in white,
to a door hidden from the view of the street,
now opened to reveal such a sight.

A boy wishes good tidings on entry,
and offers the old gent a chair,
the family remain in stunned silence,
a happy nervousness fills the warm air.

The Figure takes pause in the doorway
as if bound to the outside by fate,
The Cratchet’s carve the turkey, just cooked,
the Figure now longs for the taste.

The feasts underway, and the family,
now wish ‘Merry Christmas’ to all,
the Figure takes leave in the half light,
the snow, once again, starts to fall. 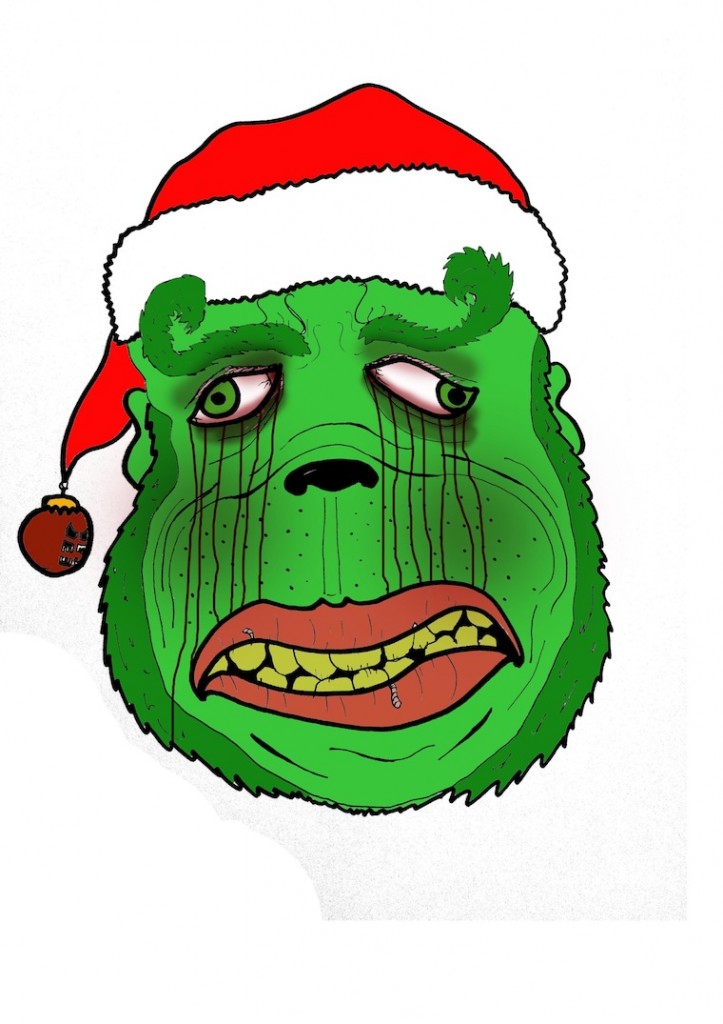 Three thousand feet up, up the side of Mt. Crumpet
the Figure now stands as alert as a trumpet
to spy on another who does not give an inch,
the creepy, cruel anti-Chrismassy grinch
with the suit of the man the figure met in the first,
Grinchy moved quickly, with presents to search
and away down the mountain the green menace flew,
the Figure looks down, to the town of the Who.
Morphing to streets bathed in Christmassy hue,
For the Who’s were a happy bunch, if nobody knew
and loved Christmas time with all their Who-hearts
and each Who knew that they all played their Who-parts
he followed Grinch into each of the Who-houses
and watched as he stole even the food for Who-mouses
“Why, but why do this?” the Figure bemused
“Why take these things if they aren’t to be used?
but be dumped atop mountains?” the Figure just stood
hidden from Grinch eyes, he misunderstood
The night was lit by a million lights,
each glowing bright nestled deep in the white
and how had his spirit turned into spite,
and why did the Figures heart feel a little less tight?
the Figure felt a tug on his 3-quarter cloak
which startled this dark, dystopian bloke
he turned around fast to see a small Who,
little Cindy Lou-Who who was no more than two
“Why is he taking our new Christmas tree?”
(but the Figure could only speak in binary)
which made the girl scream and the Grinch turn around
his eyes now round at the shrill of the sound
but the only thing left from this uncivilised scene
was the girl and a faint line where the Figure had been
“Pooh-pooh what a fuss, what was that i saw?”
The Grinch said with a grimace, then grinned green as before
As he jumped up the chimney, a rather tight pinch,
but if Santa could do it, then so could the Grinch
and so as he got to the edge of the summit,
of that monolith mountain, on top of Old Crumpet
the figure appeared right next to the sleigh,
as the Grinch stood prepared to kill Christmas day
by dumping the load, the presents and wrapping,
the stockings and Santa toys, the trims and the trappings,
but then singing drifted up, “what is this loud din?”
“I cant stand it, the singing, I must stop this whole thing!”
the Grinch looked annoyed as the singing grew louder
“I must make this Christmassy Christmas-time founder”
the Figure looked on as a grin took his face,
for the singing was not that of a Christmas time place
but that of dark chords and a message of truth
too faint to begin with, raising from the roofs,
the Who’s all sang with a devilish glee,
in a circle round a black, red and white Christmas tree
the Grinch looked on, surprised to say least
as they continued to cut and carve the roast beast
Christmas had come to the town of the Who’s
brought by a Figure in a tri-coloured hue
not Santy or Scrooge or the Grinch but who?
Brought by The Dystopian chanting ‘OBSOLETE HAS YOU’ 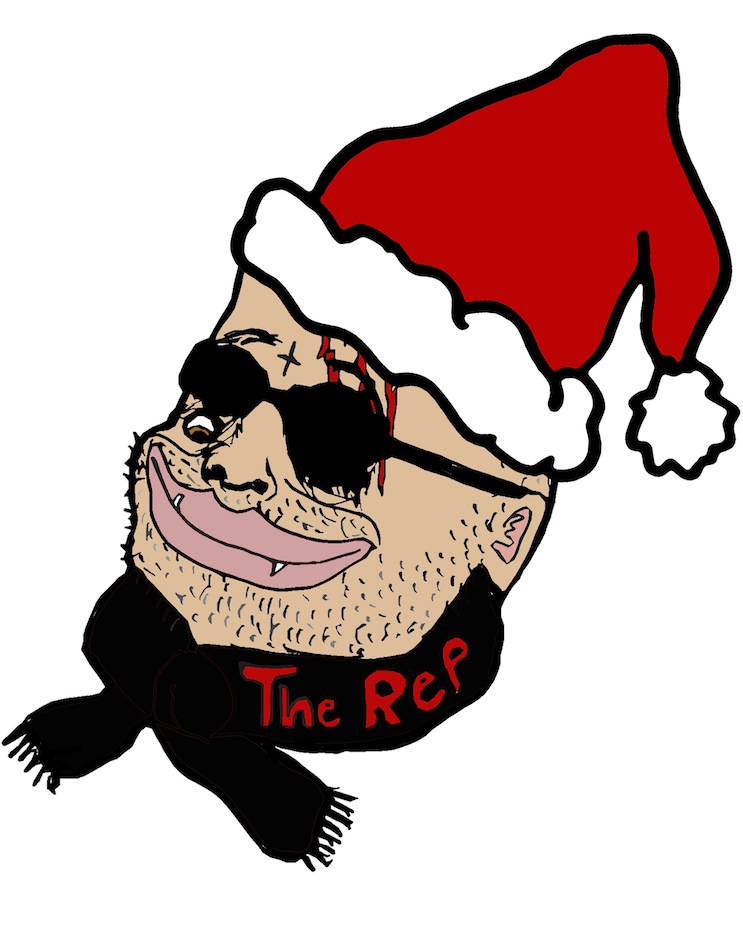