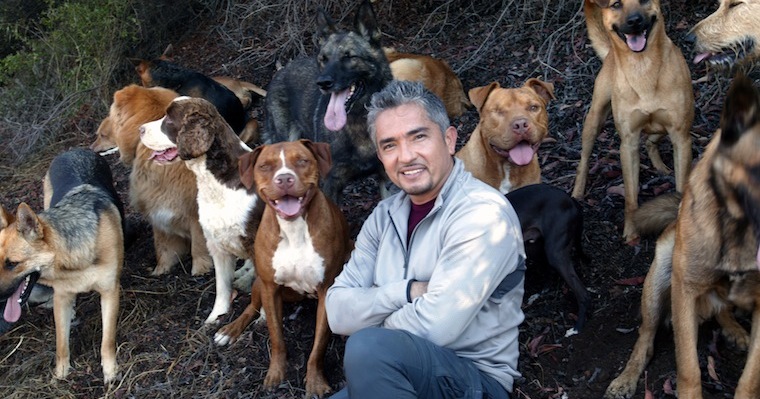 The Dog Whisperer Cesar Milan has had a rubbish few years. He explains how he almost took his own life and how man’s best friend helped him turn it all around, again.

Not long after I got my dog, I found myself watching Cesar Milan, the Dog Whisperer, on TV. I was told that he was the oracle from which I could absorb all canine-related wisdom, and using his methods I could raise my staffordshire bull terrier to refrain from attacking small children and other dogs.

It half-worked. My dog generally doesn’t like other dogs, but he loves small children!

â˜› Check This Out: Dogs Learning To Drive In New Zealand

I hadn’t watched Dog Whisperer in a while, but as I caught it on TV again the other day I decided to look up the history of the man who had in many ways helped me raise my dog; how to get him pooing and peeing outdoors, how to stop him growling at the shih tzu across the street.

It turns out Cesar Milan hasn’t been feeling too chirpy for a TV star who’s surrounded by dogs all day. In fact, his life has pretty much gone to shit in recent years. His favourite dog died, his wife left him, he invested in some crappy businesses and was left with nothing except “T-shirts and touring”. “It was the biggest shock in the world”, he said. He ended up sleeping on his brother’s couch, sitting around in church and losing a shit load of weight.

“I am a pack animal,” he said. “Everything I did was to keep the pack together. All of a sudden I had no pack.”

Even his dogs were keeping their distance.

“Dogs don’t follow an unstable leader”, he said. “I was very unstable.”

â˜› More Dogs: Rap Song About Being A Dog, Filmed By Dogs, Edited By Dogs

Mid way through 2010 he hit rock bottom and decided to end it all with a bottle of Xanax and some other pills. It didn’t work, and he woke up in hospital with a new lease (leash? sorry) on life.

“Nothing happened!” he said. “I thought, well shit, that means I’m not supposed to die. I better get back to work.”

He went back to working with the animals that brought him out of the hood in Mexico in the first place. Growing up, Cesar dreamed of becoming a footballer, a drug dealer or an actor. That was until he caught “Lassie” and “Rin Tin Tin” on TV and realised his true calling: he was going to be a dog trainer and a bloody good one.

He immigrated to the United States where he walked dogs for free in shitty neighbourhoods; “These were tough dogs, man! Dogs with one eye, three legs, dogs that had been lit on fire”. Eventually he was able to begin charging enough to open the Dog Psychology Centre, which after a while began drawing in celebrity clients (Jada Pinkett was the first) and one day, a crew of TV producers showed up… and the rest is history.

To what does Cesar Milan owe his turnaround from depression? You guessed it — dogs.

“I was sitting under this tree (and crying). I noticed the dogs started coming over, and they surrounded me. There were, like, 11 dogs all around and they started to lick my face. Normally I don’t like to be licked. I’m afraid of germs, but this was different. I had the sense that these dogs were healing me. From that night, I began to get stronger.”

If you’ve got a bit of a naughty mutt at home, check out The Dog Whisperer on TV or online.