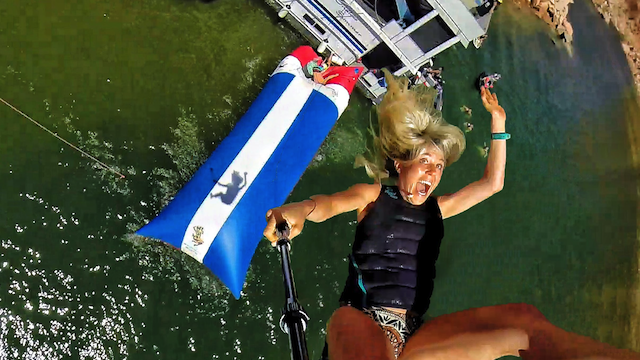 They call it the Blob.

Devin Supertramp has had a busy summer. Not only has he built the largest urban zip line in the world and the world’s first water powered hoverboard, but he’s also found time to hang out with his buddies in this amazing looking canyon and use a human catapult that he likes to call the Blob.

The Blob works how you might imagine it to – it’s just a massive thing (not really sure else to describe it) that’s filled with enough water so that when someone jumps onto it one side it moves the water to the other side of the Blob, causing anyone sitting there to be catapulted about 55 feet into the air. You know what I mean.

It looks like a hell of a lot of fun. Throw in some water boards and hover boards and you know that these guys probably had the best party of the summer. Although they could probably do with some more beers.