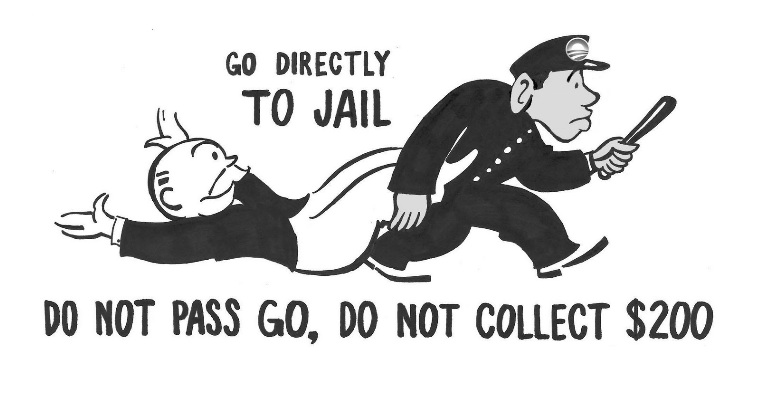 I landed in Bangkok two days ago. It was all going well until twenty minutes out of the airport, at which point I payed for my taxi and opened the door straight into the path of some fifteen year old who probably couldn’t tie his shoes. If you’ve been to Thailand before, you’ll know by now that  right of way, speeding and general road recklessness are accepted, if not welcomed if you are a national, but being a horrendously rich westerner (I have eight pounds in my bank account), obviously it was all my fault. After all, that’s only fair?

I was swiftly chaperoned to a police station and after hours of  fake witnesses giving statements (I obviously wasn’t allowed to give one), it was simply demanded of me that I either pay an extortionate fine to pay the damages for the errors of others, or risk a trip to ”The Monkey House’, or jail as we know it. I knew too well that the latter wasn’t an empty threat, so I emptied my money on the table, said a polite thank you and ran in the opposite direction.

Thailand exists in a state of perpetual flux: geographically, economically, everything-ically. What was once a dentist is now a bar and will most likely be a dentist again, except this time they’ll serve you shots whilst you get your left molar pulled out. There is a notorious hunger for money in Thailand, and admittedly for good reason. Fifteen years ago when ‘real’ travelers explored the country, there was nothing but famine and suffering. Yesterday, I sat with a Thai lady whilst she showed me her new watch and had a drink with us. This country isn’t perfect (it’s a very long way off), but it’s improved a damn sight. But there is one thing that remains the same… the police.

â˜› Read this next: Aussie Woman Takes On Snake To Save A Chicken

The Thai police will take every penny of your money. They will leave you on the street without two pence to rub together. Justice isn’t a thing earned in Thailand, it’s bought. The contents of your wallet are the only thing in Thailand which truly get you by with the law. I would estimate 99% of the Thai people are the most wonderful and generous people I have ever had the pleasure of meeting, but the 1%, the most powerful 1%, are happy to throw you in a jail without a second glance (anyone seeking a shit Sunday chick flick, see Bridget Jones – The Edge of Reason; they’re not far off). The king decides to let  few people out of jail for his birthday present every year, but the general rule is once you’re in, you’re in.

â˜› Have a browse: Penniless to Priceless: Celebrity Success Stories

A search online will show you exactly what the Bangkok Hilton really is, but search at risk, you’ll soon end up in a pretty dark place of the internet. This country is a wonderful place of astonishing beauty, but what happens between closed bars doesn’t bear the thought.

For anyone seeking a trip to Thailand, I would offer you just one piece of advice: pay up and run.