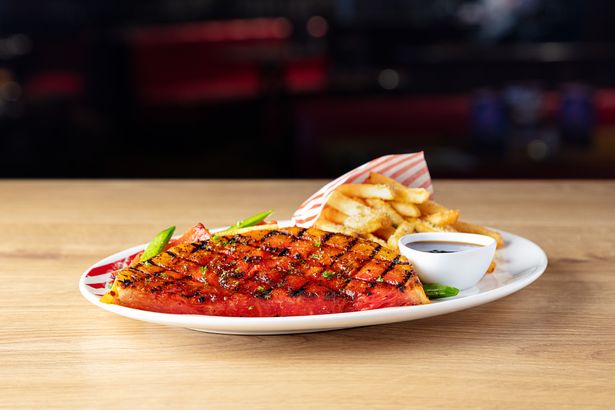 Just when you think Veganuary can’t surprise you anymore, TGI Fridays decide to roll out their first ever vegan product and it’s something that I’ve literally never seen before in my life.

Most people usually make their vegan products out of seitan or mushrooms or something like that, but not this time: TGI Fridays have decided to make their vegan steak out of watermelon. What the heck?

Not really sure how that’s supposed to taste, but I don’t even really like watermelon when it isn’t pretending to be a piece of meat. Surely it’s gonna taste completely weird and gross and sweet and not like steak at all, even if it’s marinated in loads of spices and TGI Friday’s legendary glaze?

Marinated in garlic and chilli, chargrilled and served with crispy fries, roasted vegetables and our Legendary Glaze

Available from 6th January – try it as part of #Veganuary2020 @veganuary🌱 pic.twitter.com/29YQMN6K4n

Here’s what Terry McDowell, head development chef at TGI Fridays, told The Mirror to try and placate those fears:

We’re really excited about the new vegan steak because it’s unique to us here at TGI Fridays.

We have taken a watermelon and made it into a main course. Most people think of watermelon as a sweet dish, but we have flipped that on its head. It is full of flavour and perfect for Veganuary and those who want to try something different.

I mean you’ve gotta admit that it’s pretty different, just not really sure that it’s gonna be that great. Interested to see what it tastes like, although given the fact that I don’t really like watermelon I can’t see it being that positive a review from me.

Also – thanks to Hopey for this one – but isn’t it kinda crazy that you can buy a gigantic watermelon for a couple of quid down your local market, but they’re expecting you to pay £13 for a slice of it with some spices on? Surely you would have to be an absolute idiot to go to TGI Fridays and even contemplate doing that? Seriously?

For more of the same, check out Subway’s Veganuary option. Pretty standard, but still pretty cool?