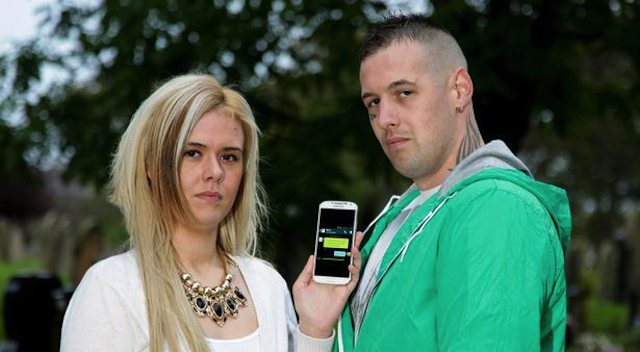 Just in time to creep you out for Halloween.

This is almost as creepy as abandoned American shopping malls but there’s no denying if this happened to you the  you would be weirded the fuck out.

It all started when Lesley Emerson died at the age of 58 from bowel cancer. She was buried with her mobile phone and as a way of dealing with her grief her granddaughter Sherri and other family members would send her text messages.

Of course, they didn’t expect a reply but that’s exactly what they received when a message stating ‘I’m watching over you, and it’s all going to get better. Just push through.’ It turns out that even though O2 had assured the family that the number would never be used again it had actually been given to someone else, who claims he replied to the messages as he though the were ‘joke from friends’. I guess that’s not really that good an excuse, but it’s slightly better than just being a heartless fuck messing around with grief stricken people’s feelings.

Sherri had the following to say about the incident:

I sent the text to gran talking about what I had been doing, just as I always did.

When the reply came through at lunchtime the following day I felt sick. Crazy stuff was flashing through my mind like “Is she still alive?”

Then I started getting horrible visions that someone might have dug up her grave and taken her phone, my mind was full of all sorts of really unpleasant possibilities.

The person who was texting me was apologetic when we actually rang the number and said he thought his friends had been winding him up.

He got the number innocently but 02 had promised my dad when he rang after Nan’s death that the number would be destroyed so as far as we were concerned it would always be hers.

Nan got bowel cancer and died very quickly, she was only diagnosed in October 2010 and died the following June. It came so suddenly and none of us could quite get our heads around what had happened.

It helped to text her, that was the way we were always in touch every day when she was alive. I texted her at least once a week for three years until last week I suddenly got a reply.

I stared at my phone and the message was written as though it was from her, it was so strange, I went cold and shaky.

The phone company have told us they will try to retrieve the number and take it out of circulation, but for me it’s too late, that special way I had of feeling I was in touch with her is gone forever.

I couldn’t bear to go to her grave – she was like a mother to me, we had a special bond.

You can imagine what I was thinking seeing a message flash up from her.’

Yeah I can imagine it must have been terrifying, even if texting a dead person is kind of weird/asking for trouble.  O2 confirmed that they did accidentally sell the number on to Giff Gaff (whoops) and that they were trying to retrieve it for the family, but thy couldn’t really do anything unless this prankster replied to an email. Weak effort guys and definitely not the excellent customer service we come to expect from O2.