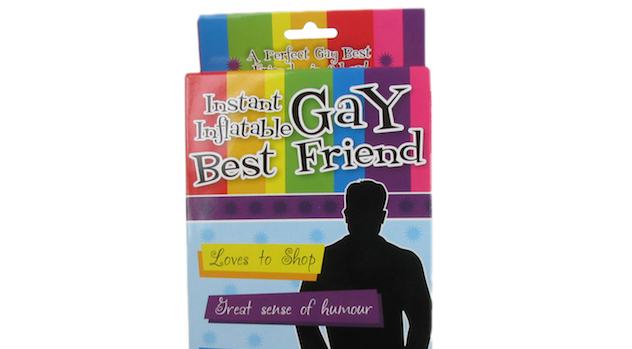 An inflatable gay best friend is a product I never ever thought I would see being sold anywhere, least of all at one of the country’s leading supermarkets.

If you read another news sites/blogs then you may have heard over the last couple of days that Tesco and Asda were forced to remove their Psycho Ward and Mental Patient Halloween fancy dress outfits as they were accused of being insensitive to the mentally handicapped, and it looks like today they’ve put their foot in it again by also selling what is termed ‘an inflatable gay best friend.’

I don’t know why the hell anyone would even manufacture such an item, or who the hell it could even appeal to, but I know for sure that it’s probably a bad idea for a major super market chain to sell these at any point. But even more so after they’ve just been massively rinsed about another one of their costumes and forced to take it off the market. I just can’t believe that an item described as an inflatable gay best friend exists though? I mean seriously?!

The blow up man is dressed in a pink top, bright blue shorts and is described as having a Gary Lineker-esque face, whatever the hell that means. There are also a bunch of gay stereotypes – mainly based on shows like Sex And The City and Will & Grace in the write up, which attempts to explain why the ‘inflatable gay best friend’ is a great present for birthdays or hen nights. I still need some convincing. Also rather funnily the word gay is spelled ‘g*y’ on Tesco’s website implying that it’s a swear word or at least offensive in some manner?! You know that gay rights supporters aren’t going to like that one, not one bit.

Tesco backtracked immediately over the article today and have taken it down. They’ve argued that the doll hasn’t been available to actually buy from the site for several months – even though the page has remained on the site – and that it wasn’t actually an official Tesco product but was uploaded by a third party seller. Apparently it was deleted as soon as they found out about it because they found it offensive, but for some reason it was still available to view on the internet two months later. Sounds about right yeah, sure. Another great piece of damage control there from Tesco – great work guys. 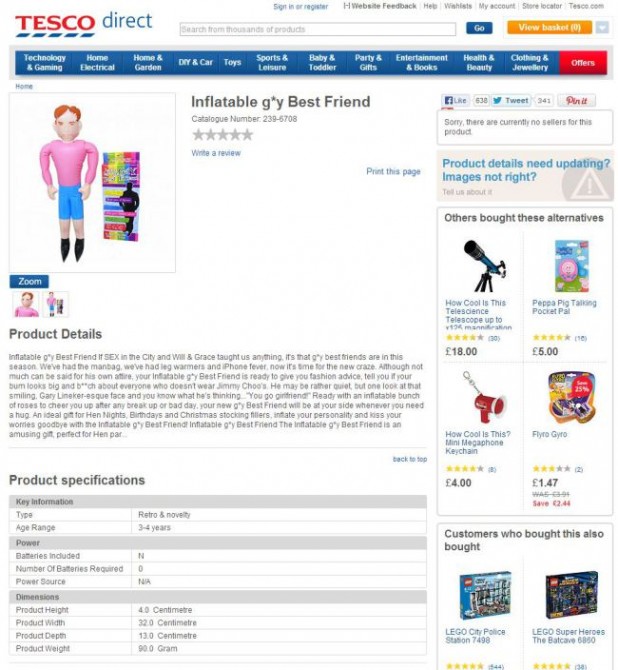