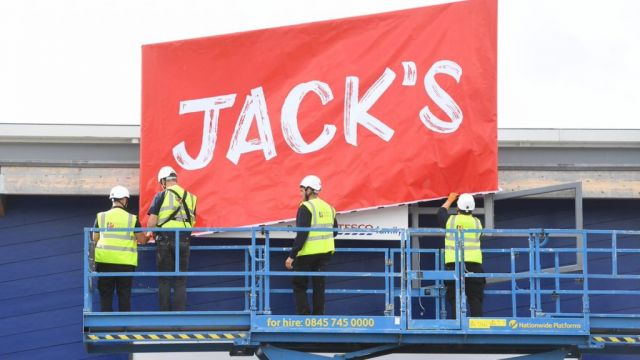 The face of the supermarket status quo in England is set to change with a whole lot of recent developments in the sector ensuring that it’s going to look very differently in the next few years.

At the moment, Tesco is currently boasting a 27.4% market share, but this is set to come under major threat following the £14 billion merger between ASDA and Sainsbury’s and the fact that more and more people are heading to Aldi and Lidl due to the fact that they’re often offering higher quality goods for cheaper prices. Tesco obviously isn’t too happy about losing their dominance of the industry, so in order to try and retain it they’ve decided to open up a new chain of stores called Jack’s to rival the budget supermarkets out there:

Jack’s is going to offer the cheapest prices in town – for example they’re gonna sell a loaf of bread for about 45p -and have an appearance like their German friends: large spacious aisles and bargain bins full of random crap you’re never actually gonna need but cant’ resist picking up. The first two stores opened up today in Chatteris, Cambridgeshire and Immingham, Lincolnshire – both major innovation hubs clearly, or perhaps just where loads of people who are thirsty for bargains live – and a whole bunch more are set to be opened all over the country in the next six months.

Won’t be long until you see one on your street either I’m sure. Tesco is dead, long live Jack’s.

For more bargain food, check out the UK’s cheapest and best fry up for just £1. Can’t beat it.