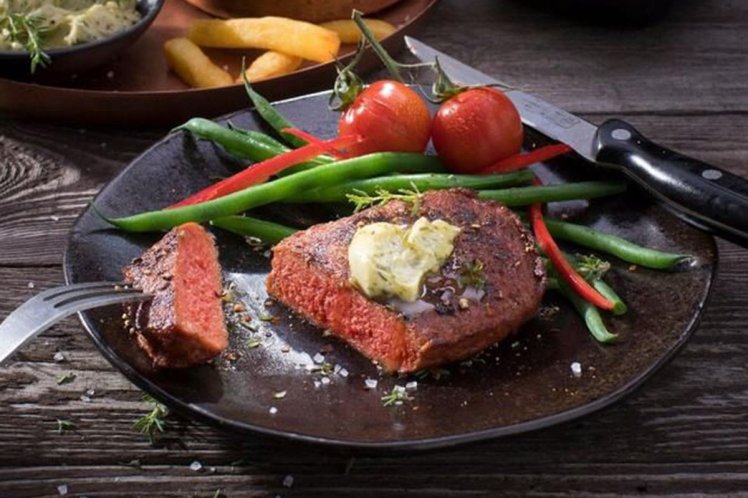 Believe it when I see it.

Everywhere you go these days there seems to be a glut of vegan options and it seems like the movement is only going to get bigger and bigger with more and more major brands becoming involved with it.

The latest behemoth to adopt a vegan option is Tesco, who have announced that they’re going to be stocking Vivera’s new plant based steak which is apparently the first 100% plant based steak in the world. I’m not sure of the exact details of its ingredients, but apparently it features wheat and soy heavily which is hardly that surprising as we’re dealing with vegans.

There’s a really bizarre advert below for it which doesn’t really do that much to sell it or make much sense, but here’s what Vivera’s Gert Jan Gombert had to say about it as well:

A large group of vegetarians, vegans and flexitarians has been very interested in such a product for years,’ Vivera’s Gert Jan Gombert said in a statement to Plant Based News.

With the breakthrough of its market introduction and large-scale production, a large group of consumers can enjoy this very tasty plant-based product.

The smell, taste and bite can hardly be distinguished from real steak and we are convinced that this product will meet a large need of consumers.

It is very important that we eat less meat, both for our own health, animal welfare and for our planet. Innovative and high-quality plant-based products can make a significant contribution here.

Yeah I mean I’m not sure if I believe the reaction of that guy – wherever he’s from, Sweden? Norway? Really no idea – in a really dumb advert and the testimony of a committed vegan as to how good these steaks actually taste when compared with real meat, but I’m certainly willing to give them a go considering most recent new vegan food I’ve tried has been completely awesome. It’s probably cheaper than actual meat too, so you know, everyone wins.

The steaks will be rolled out in 400 Tesco stores from May 20th and then will start appearing in European supermarkets over the summer too. You’ll probably be eating one at a BBQ in the summer and you won’t even know it. That’s what life’s going to be like from now on. Vegans taking over, whether you like it or not.

For more vegans, check out this one who wanted to prove she could climb Mt Everest on a vegan diet but ended up dying. Ironic. But also sad.