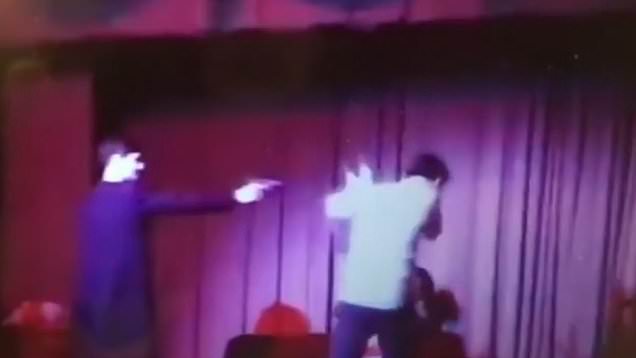 I don’t think I ever used to get scared that someone might switch a fake gun for a real one in a school play back when I was a kid, but it turns out that this is shockingly what some children these days do actually have to contend with when attempting to become thespians.

The footage below comes courtesy of a school in Moscow (of course – it had to be there or Florida) where two pupils were rehearsing for a performance of ‘Troubles With A Gentle Heart’. 14 year old Mikhail Pronin fired the gun at 14 year old Nikita Chernykh and hit him in the nose and the back of the head with bullets from the pneumatic gun – a weapon that is widely used for self protection in the country.

Pronin realised very quickly that something was up and stopped firing, but the damage had unfortunately already been done with Nikita’s nose bleeding and the boy screaming in pain. Looks like they were really hamming it up before that happened too, so it’s a real shame that they had to stop. Maybe save the method acting for later on in your careers guys.

Nikita was taken to hospital and released later on the day without too many problems. His mother was less than impressed though, saying the following:

I am still puzzled by the fact that there was a gun at school rehearsals. I was told about what happened by teachers.

My son was given medical help and then sent back home. One of the bullets hurt his nose, another one hit the back of his head.

I mean she’s got a pretty good point – why was that gun swapped for a toy one in the play? If it was a prank it wasn’t a very good one because it sounds like Nikita got kinda hurt and Mikhail shot him twice and stopped, so it hardly sounds like he was in on it either. Just sounds kinda dumb to be honest, but it is kinda crazy that someone fired a real life gun at someone else during a school play. Don’t see that every day.

You do see people firing guns at each other in school all the time though, so much so that Florida are now allowing teachers to carry guns with them. Sure that’s gonna sort it out for them.