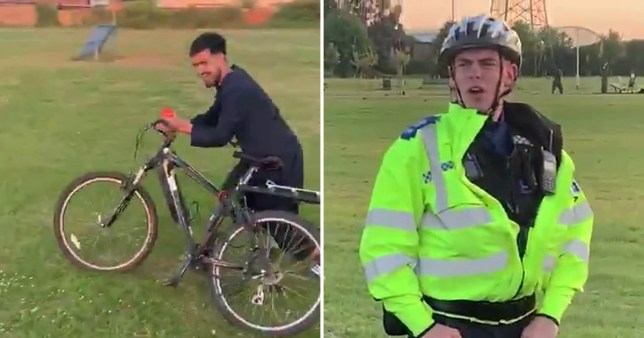 It’s hard work out there for PCSOs who aren’t ever really given the same respect as actual police officers. So just imagine what it would be like if one single PCSO took it upon himself to ask a large group of chavs to go home and practice social distancing.

Well that’s exactly what happened over at Godolphin Playing Fields in Slough this week, as this PCSO confronted a group of around ten teens who had gathered in the park to play cricket.

He pretty much told them to get on their bikes, except they got on his bike instead:

This is the most disgusting thing I’ve seen this guy is doing his job advising you guys to stay home for you and your families health. Imagine in Ramadan not being able to have a drop of respect in you. Also, if lockdown doesn’t get released it’s thanks to the boys like this🤮 pic.twitter.com/afgBbV5BAL

Pure disrespect, and like the Tweeter says – overall shitty behaviour by this crew of lads flouting lockdown rules.

I’m not sure what the point is though of having PCSOs who are basically powerless social workers show up to deal with situations like these, as you’re never going to get people to take them seriously if they can’t even threaten arrest. Not only that but this guy has now been filmed, ridiculed and sent viral all over Twitter after having his bike stolen. At least he remained calm and professional though – not much else he could do I suppose.

For the teen with Aspergers fined £590 for asking whether a trans PCSO was ‘a boy or a girl’, click HERE.