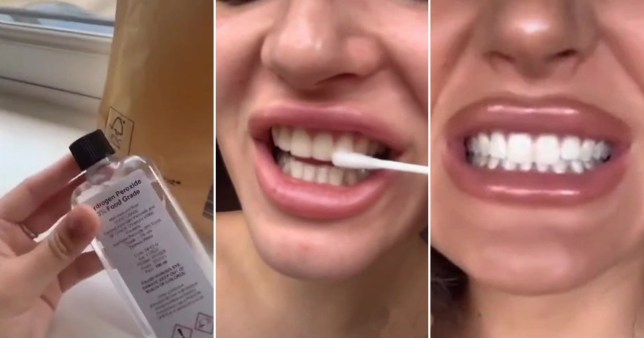 It seems like every other day I’m writing about some ridiculously stupid new trend on TikTok and it almost makes me think that it would be a good idea if Trump ended up being able to ban it in America, especially when people are using the platform to do stuff as dumb as brushing their teeth with bleach.

This is what’s going on in the world of TikTok at the moment, with teens rubbing bleach straight onto their teeth with a cotton bud in an effort to make them whiter. The main video has been viewed 15 million times and features the girls saying that she buys hydrogen peroxide on its own as it’s the main ingredient in whitening strips and applies it via the cotton bud for four days to give her incredible results. It’s being reported that sales of hydrogen peroxide have increased massively since the video went live.

I suppose that does look like it’s pretty good, but dentists have warned that it’s a really bad idea to perform whitenings yourself with hydrogen peroxide. Dr Kunal Patel said the following to Metro.co.uk:

Applying hydrogen peroxide, or bleach as it’s more commonly known, is likely to lead to painful tooth sensitivity at best.

In the worst case scenario, a high concentration could bring about severe burns on the inside of the mouth, lips and gums. It could even result in the need for gum grafts and tooth loss, which can be tricky to fix.

Even more worrying is the fact that bleach can be deadly if consumed.

There’s a very simple reason why all dentists recommend only ever having your teeth whitened by a registered dental professional at a clinic.

By law, over the counter treatments must be of a low enough concentration so as not to do any harm, but this means they’re not usually strong enough to make a difference.

Treatments bought over the internet however, like hydrogen peroxide, are much stronger and bring with them the very real risk of burns and tooth damage.

Yeah, I think I’ll take the dentist’s advice here and not some teenager on TikTok. Suggest you do the same.

For more teeth, check out Emily Ratajkowski brushing her teeth in her underwear during lockdown. What a babe.