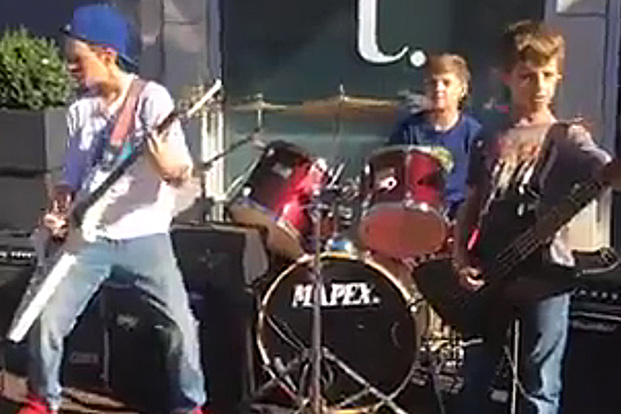 There were a lot of 9/11 tributes going around this week as 15 years had passed since that fateful day, but I don’t think I’ve seen a more awesome one than these three teenagers covering a Metallica medley outside some mall in the middle of nowhere in America.

The three kids play what’s known in the business as ‘The Justice Medley’ which is basically four tracks off ‘…And Justice For All’ – ‘Eye of the Beholder,’ ‘Blackened,’ ‘The Frayed Ends of Sanity,’ ‘… And Justice for All,’ then also run through ‘For Whom The Bell Tolls’, ‘To Live Is To Die’ and ‘All Within My Hands’.  They absolutely nail it as well, but I suppose that’s only impressive for the guitarist and bassist because we all know Lars Ullrich sucks on the drums:

Yeah, maybe the kid could work on his vocals but everything else about that totally rules. Especially the way he looks completely cool when he’s playing guitar with his backwards cap on and miming Hetfield’s moves. Absolute killer – you know he’s getting so much pussy after that performance, especially now it’s going completely viral and Metallica themselves shared it on their Facebook page. Not bad at all, although the bass player could do with doing some more of that stupid spider walk Rob Trujillo loves doing.

For more Metallica, check out every time James Hetfield has ever said yeah on one track. Yeah.