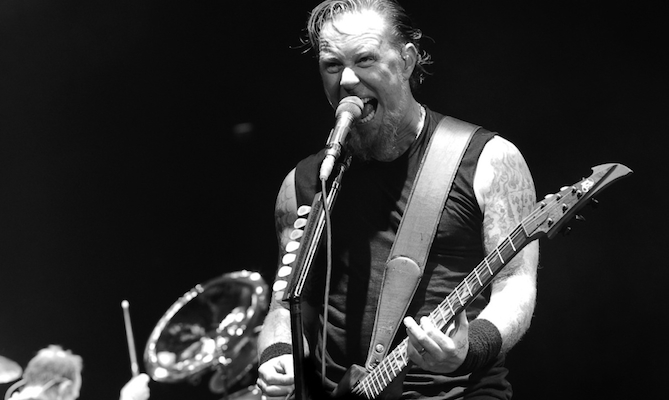 James Hetfield has written a lot of songs with Metallica and in pretty much every other one he sings or shouts ‘yeah’ a couple of times. So this one Metallica fan made a James Hetfield ‘yeah’ supercut. And it rules.

If you were a hardcore Metallica/James Hetfield fan who had loads of spare time what would you spend it doing? Maybe learning to play Metallica songs? Or forming your own band – influenced by Metallica obvs –  and then when you make it real big pay tribute to the big guy in interviews by citing him as your main influence? Or maybe do some fan art or something and send it to Hetfield? Or maybe do none of those things and just do regular stuff in your spare time like hang out with your friends and watch TV shows?

â˜› More Metallica: Metallica’s Nothing Else Matters Transposed To A Major Key

All of these are valid options, but it’s not the path that one Metallica fan – Kevin Conklin – decided to follow. No, instead of doing the normal thing and do normal stuff, or even try to play guitar and start his own band – which pretty much every guy in the world ever has probably tried at one point in their life – he decided to listen to every single Metallica song ever and find out all the times James Hetfield said ‘YEAH’ and then mix them all into one three and a half minute song. I bet that was a really fun task to carry out.

But still, Kevin Conklin did it and it’s here now and I’m eternally grateful. Granted, my favourite part in a Metallica song is when he says ‘Hey hey yeah’ at the start of the song from Mission Impossible 2 (or maybe the video to their cover of Whiskey In The Jar with all the lesbians at the house party) and that’s mainly because it sounds really stupid, so I’m perhaps not the most appreciative of this as some massive Metallica fan like my pal David Baker would be. But I can appreciate that James Hetfield does a pretty good ‘yeah’ – although probably not as good as Kurt Cobain or Art Alexakis – and I totally love this supercut so I think most people reading this will too.

It’s also pretty incredible how he can have so many variations on ‘yeah’ that he can fill up a three and a half minute song with loads of different versions of it and it never gets boring. It actually sounds pretty good too – at least way better than anything of Death Magnetic or that stupid Lulu album they made with Lou Reed. I’m still coming to terms with the fact that that even exists because it’s one of the most terrible things that I have ever heard. Ever.

â˜› Don’t Believe Me? Listen To This: Lou Reed Vs Metallica

Anyway, if you want to hear what one man growling ‘yeah’ over a 30 year period sounds like, take a listen below. It’s better than that description: