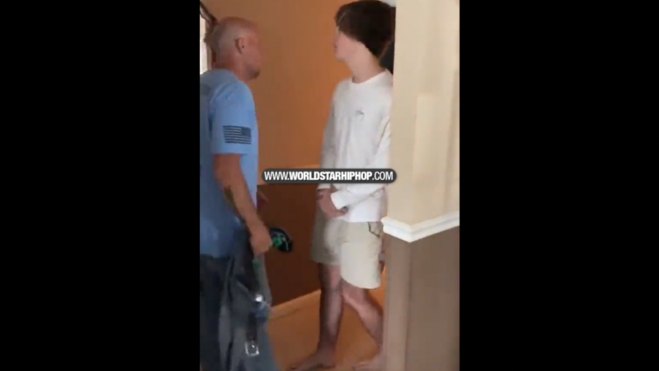 Imagine this was your son.

Most people go through a phase as teenagers where perhaps we weren’t as respectful as we should have been to our parents and looking back it’s a wonder how they didn’t disown us completely.

I think you’d be hard-pressed to find anyone treating their parents with more disrespect than this kid though. Warning = cringe overload.

Oh dear. Where to even begin? You’ve got this rich white kid who thinks he’s black getting in his dad’s face, throwing up gang signs and calling him the N-word. And what’s with his weird pronunciation of the N-word? Is that a version he thinks white people can say or something? The worst part though is how he threatens to beat up his dad once the camera stops rolling. His own dad!

By far the best part of the video though is when the guy filming says “you’re white and live in the suburbs”, which only seemed to make him madder. What can you say really? Hopefully it’s just a phase that he gets over sooner rather than later. One day his dad will be gone and he’ll regret and wish this video never happened. Unfortunately for him, the internet never forgets.

To watch two white guys get into a scrap after one of them said the N-word in a barber shop, click HERE.