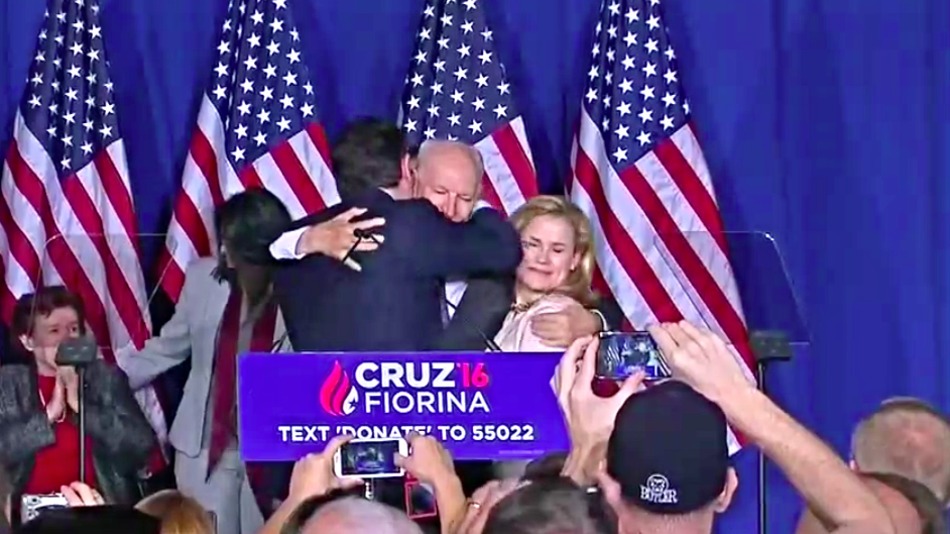 Donald Trump is one step closer to becoming US President.

Donald Trump is one step closer to actually becoming US President after Ted Cruz bowed in defeat last night, leaving Trump on a clear run to the Republican nomination.

Cruz decided to step down following a crushing defeat in the Indiana Primary last night, with Trump leading 54% to his 36% (John Kasich had a measly 8%).

Cruz announced to the crowd:

Together we left it all on the field in Indiana, we gave it everything we’ve got, but the voters chose another path.

Tonight, I’m sorry to say, it appears that path has been foreclosed.

With a heavy heart, but with boundless optimism for the long-term future of our nation, we are suspending our campaign.

And he then punched and elbowed his wife in the face:

I guess it was only a matter of time before Donald Trump finished Ted Cruz off for good. He’d basically been bullying him (and his wife) for the better part of a year and last night in Indiana he delivered the finishing blow. Remember when he called Cruz a pussy in front of the whole world? Brutal stuff. Though I guess it doesn’t help when your own daughter merks you on live TV either.

So now what? Donald Trump vs. Hillary? That’s going to be a ruthless battle for sure. Expect some seriously brutal Monica Lewinsky jokes from Trump.