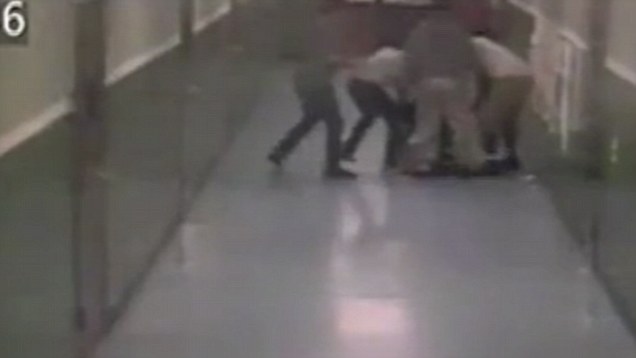 A teacher was caught on CCTV ordering a group of older kids to attack a younger student and “teach him a lesson” on her behalf.

Florida’s St. Lucie Country School Board officially fired teacher Dru Dehart from the school after they found out she got six 8th grade kids to beat up a 7th grader named Radravious Williams.

CCTV footage showed the teacher point to Rad (we’re calling him Rad from now on) and instruct the older kids to go after him. The older boys later confessed that she’d asked them to “teach him a lesson.”

Rad’s mum said: “He said that they brought him in the hallway, and that they held him down, they kicked him, they stomped him, they beat him. And as he was trying to get away, they just basically like, continued to just torture him. (The teacher’s) remarks was, ‘I got my eighth grade boys on you. You’re not so tough now.”

What the hell was this teacher thinking? You can’t just go around putting bounties on students’ heads just because they spoke back to you or didn’t do their homework. That’s going to get you fired every time. I mean don’t get me wrong I’m down for teaching unruly kids a lesson but I’ve got a feeling Rad didn’t deserve an organised beat down like what he got.

The other question is, why did the other kids listen to the teacher? That’s not how real bullies do things. What did they have to gain from it? It’s not like she’s hot and they wanted to impress her (from the looks of things). Do kids just look for any green light to kick the shit out of each other?