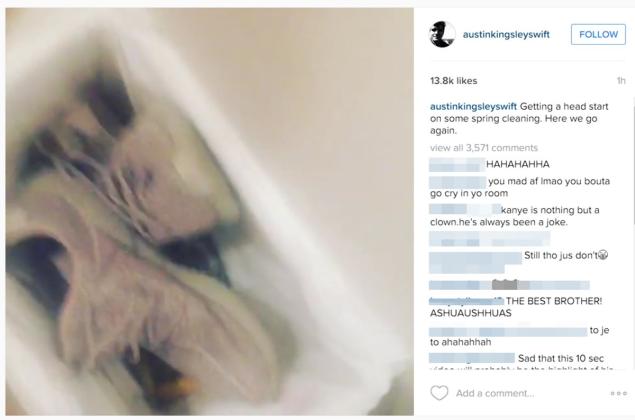 Kanye West has recorded a song about having sex with Taylor Swift and her brother is furious about it.

Taylor Swift’s younger brother went into meltdown earlier after hearing that Kanye West referenced having sex with her and called her a “bitch” in his new song ‘Famous’.

This is the lyric:

23-year-old Austin Swift lost the plot and let everyone know how furious he was on Instagram.

He posted this video in which he can be seen dumping a pair of $950 Moonrock Yeezy Boost 350 trainers (sigh) into the bin:

Getting a head start on some spring cleaning. Here we go again.

Meanwhile, Kanye’s taking to Twitter to tell his side of it:

Kanye did not call for approval, but to ask Taylor to release his “Famous” single on her Twitter account. She declined and cautioned him about releasing a song with such a strong misogynistic message.

Does Kanye feel like Taylor Swift owes him because he helped propel her to next level superstardom when he hijacked her acceptance speech at the Grammy Awards that time? I mean it’s not like she was doing too shabbily before that. Very strange move by him to firstly stick those lyrics in a track and then try to act like Taylor gave him her blessing.

P.S. 100% chance that Taylor Swift’s brother took those trainers out of the bin when he was done filming.