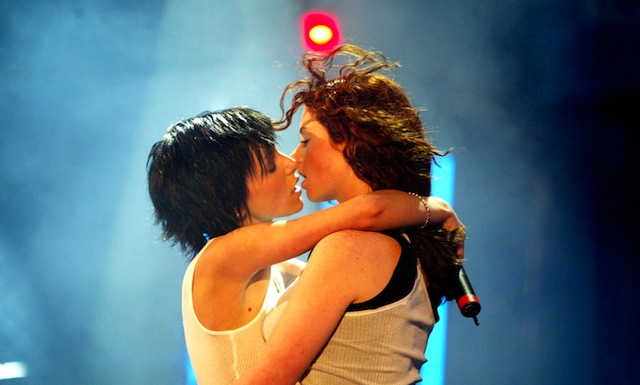 Would love to hear Putin explain why he booked a lesbian pop duo for the opening ceremony of the Winter Games.

Lesbian Russian pop group t.A.T.u. (they may only be pretend lesbians — whatever) who were pretty big in the early 2000s performed their song “Not Gonna Get Us” at the Sochi Olympics opening ceremony yesterday, which was slightly baffling all things considered.

You’ve got to wonder what Putin was thinking when he booked them and wonder if this is some sort of ultimate troll move on his part. Or is it in fact a genius PR move? When the whole world is talking crap about your country, saying your toilets are crap and that you hate gay people and you’re generally woefully unprepared to host the Winter Games, that’s when you have to do something to win the people over. Solution = hot lesbian chicks up on stage. Boom – problem solved. Actually quite a genius move if you think about it.

Still, would be great to hear Putin explain this for himself: “Oh no no no, I only meant gay men aren’t welcome. Gay girls are awesome!”

No full video of the performance online yet, but watch these clips: