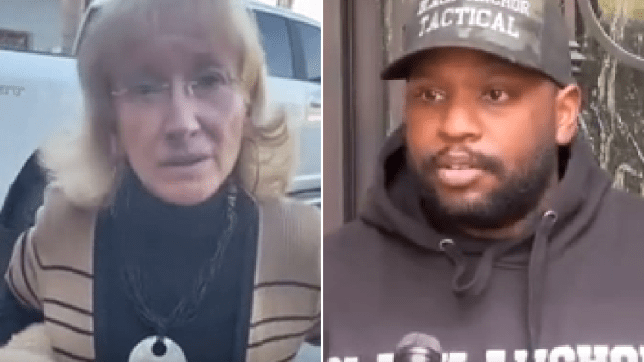 That’s not a good look.

There’s been a lot of talk of racism in 2020 and yet videos like these are still cropping up all over social media and proving that even more people just haven’t been listening to the discourse in the slightest.

The video comes from Discovery Bay in California, where a woman named Adana Dean was confronting Gerritt Jones and his family for allowing their pit bull Dice to roam around outside his house without a leash. Whilst there may be some legitimate concerns about Dice due to the stigma that has surrounded pitbulls for some time, there’s no question that Dean went around expressing her qualms in completely the wrong way.

Firstly, she brought a taser to confront the Jones family and secondly she repeatedly said that they were a black family living in a white neighbourhood and should try acting white to fit in. There’s so much wrong with that sentence that I don’t even know where to start.

Anyway, there’s a five minute video of her bizarre rant below. You can read Gerrit Jones’ comments on her underneath that:

Normal to her is people who will lay down and submit to unfortunately her white privilege and white supremacy.

She had a stun gun and if my sister or any of them got physical with her, the story would’ve been this black family is assaulting this white lady in the streets.

I want my son to grow up and be proud of who he is. I hope that people all over the country learn from this see that this can’t be tolerated.

We’re going to act black in our white neighbourhood.

Fair play to the guy. Police were notified about the incident but determined no crime had taken place and animal services were also told about the lack of a leash, but they also came to the conclusion that it wasn’t a big deal either and that Adana was just making a whole lot of noise about nothing.

The question though is just why people like this are so clueless about how to behave in regards to other people of a different race? You would think people might have become a bit more clued up with everything that has happened this year but I guess not. Sad.

For more of the same, check out that racist Billy Steele guy getting knocked out on the tube. Never gets old.