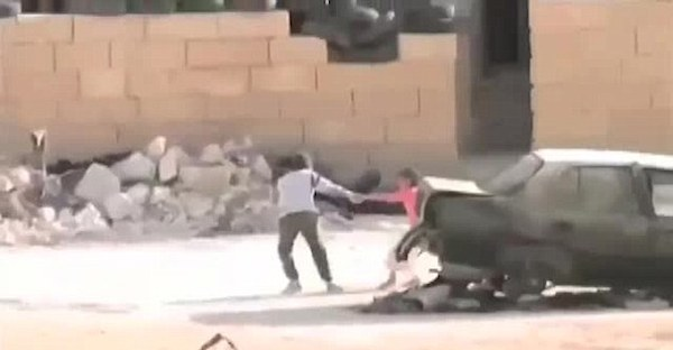 I think we all know that things are pretty messed up over in Syria at the moment, but that doesn’t mean that there are incidents that don’t give us hope that things might turn out OK over there and that ISIS might finally be stopped.

This clip is one of those. It shows a daring act of heroism from a young boy, who dodges through sniper fire in an attempt to rescue another young girl trapped behind a car. He fakes being shot after the first round and plays dead which allows him to buy some time to grab the girl, before running back through a hail of fire. Miraculously, none of them are hit.

As great as it would be to believe that the video is true, people are doubting it mainly because it has no real legitimacy and it’s pretty miraculous that these snipers would completely miss the kids considering how many shots they’ve fired – I guess all that ISIS training isn’t really as hot as it looks. In fact, I’m jumping the gun even there as there’s no evidence that the snipers are even ISIS. The clip was uploaded by the Shaam News Network – run by Syrian activists and that’s all we know about it.

Let us know what you think.