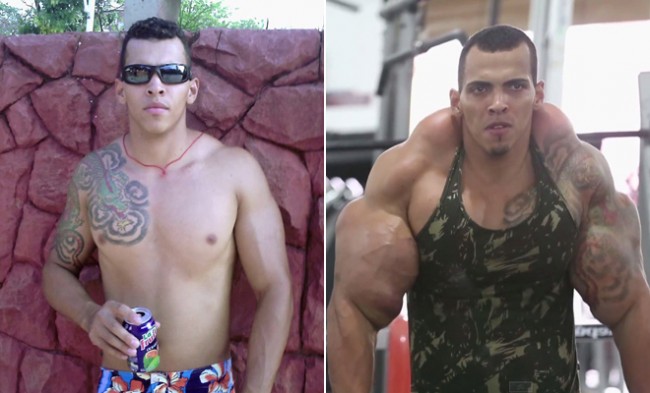 Do you think this guy is taking enough synthol?

We’ve run a couple of posts on synthol freaks before, but I’m quite sure we’ve never heard of a dude who nearly lost his arms because of it.

Bobybuilder Romario Dos Santos from Brazil clearly achieved the desired effect after taking fuck tons of the stuff, despite warnings that it can cause nerve damage, pulmonary embolisms and, in Romario’s case, turn your muscles to rock:

I remember the doctor told me that they would need to amputate both arms — they said everything in there, all my muscles, were rock.

Doctors were able to save his limbs in the end after cutting out the muscle. Dos Santos has been synthol free for 2 years now, but kinda wants to start again:

I still feel like taking synthol but I won’t take it again. If you take it once there will definitely be a second time — it’s addictive.

Yeah probably best not to mate. How about just a normal workout with maybe a protein shake instead? Or just give up working out altogether — we all know it’s all about the dad bod nowadays anyway.