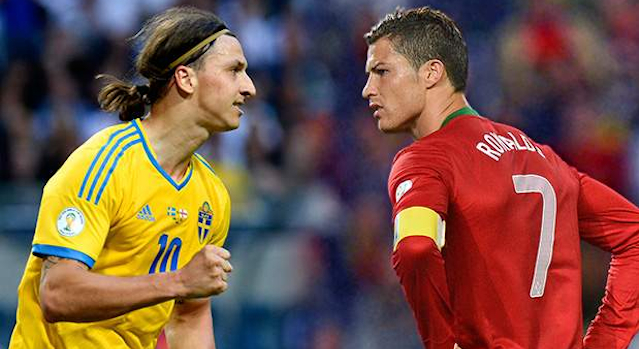 What’s the best way to gain an advantage in an important football match? Set up a karaoke singer outside your opponents’ hotel at 7:15am.

When it comes to the World Cup and qualification for it, the stakes couldn’t be higher. In particular tonight, the Sweden V Portugal match looks set to be a doozy, with Portugal taking a slender 1-0 lead over to Stockholm for a match that promises to deliver blood, sweat and tears (and probably a few red cards) as two of the biggest superstars in world football look to make it over to Brazil next year. Unfortunately, there can be only one and we’re all set to find out who it is in a few hours.

The people of Sweden are obviously desperate for their team to make it to the World Cup (I mean remember World Cup 94 or Euro 2008 without England – how boring were they?) and Swedish radio station RIX FM went the extra mile this morning. They hired a karaoke performer to do a little bit of singing outside the Portuguese team’s hotel at 7:15 am, thus ensuring that they woke up on the wrong side of bed.

RIX FM weren’t even subtle about claiming responsibility for the prank – which whilst isn’t as bad as Ronaldo (R9) getting food poisoning before the World Cup final or the same fate befalling Spurs on the last day of the season a few years back, surely has to go up there as one of the most unsportsmanlike gestures in World Cup history – as they wrote on their Facebook page in the most unsubtle way possible: ‘We hope that some Portuguese people will be tired tonight.’

I was kind of on the fence about who I wanted to qualify tonight but I’m firmly backing Portugal. Whatever happens though it promises to be a great match with A LOT of aggression and bad blood.