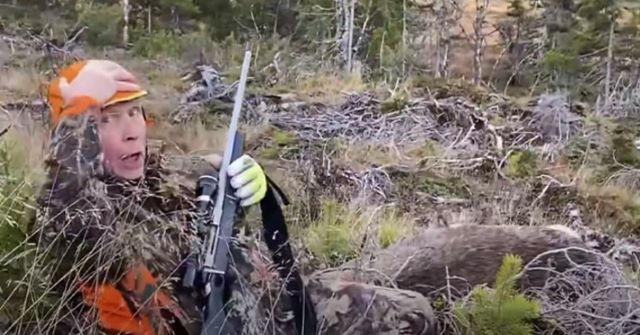 This was so close to being an ‘instant karma’ video.

I’m not gonna get into the moral issues around hunting wilding animals, whether for sport or for food, because people can make their own minds up about that. But judging by the fact that YouTube comments have been disabled under this video, I’m guessing most people aren’t exactly in support.

In any case, this was almost a very different video altogether, as the hunter comes within seconds of being obliterated by his target before landing a crucial final shot:

So close to being an ‘instant karma’ video, but alas. I’m guessing this guy isn’t too good of a shot if he needed 3 to down the animal, but I guess it becomes progressively harder after you miss the first and second shots and are shitting your pants at the imminent arrival of a moose antlers through your guts. Dude looked like he was about to have a heart attack at the end there.

Fair play to the moose for bringing the beef (so to speak). I mean imagine getting shot and immediately going to look for the shooter? Nature is metal AF indeed.

For the hunter who shot dead his 18-year-old son after mistaking him for a moose, click HERE. Whoops.