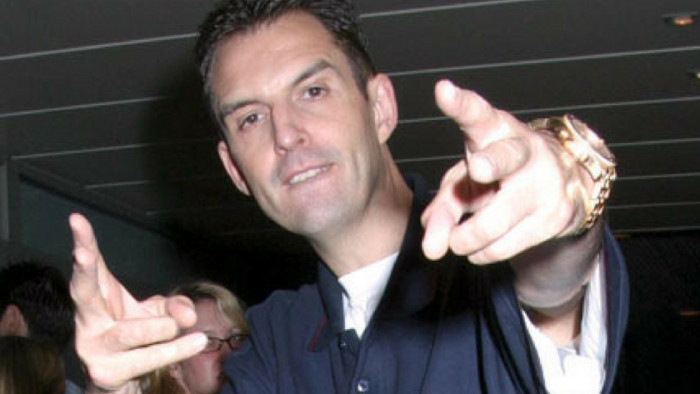 The stories exposing Tim Westwood keep on flooding in.

Back in May, we compiled a list of stories from uni students that exposed ‘The Big Dawg’ Tim Westwood as an old creep who preyed on 18-year-old uni students and would routinely hook up with them after performing at universities around the UK.

Since that broke, a whole bunch of new stories have come out and resulted in #survivingtimwestwood trending on Twitter. Have a read for yourself:

I wasn’t going to come forward because I was scared of the repercussions, but the tweet about Tim Westwood triggered me. What I endured from 2011-2016 was something that I vowed to take to the grave but, as time passed I realised that it was eating away at me and affected my

relationships with men, family and friends because I was ashamed to tell them about what I went through.

2011… I was young, happy and carefree and was sure of who I was. That all changed when I met Tim at a uni rave.

Initially, I was mesmerised because’s Tim Westwood that guy from Pimp My Ride (funny because I actually hated the UK version because of him), the well known DJ from Radio 1. Tim was very charming and had a way of seducing young, black impressionable women.

I was 18 at the time but I always looked younger than my age. That night he took my number and messaged me. I was a bit apprehensive about meeting him, but I eventually did.

I met him in Fulham Palace Road (this is where he does his crib sessions).

At the first meeting, he offered me something to drink, it was Ciroc and coke but he didn’t have any as he claimed to be teetotal. At the time Ciroc was very popular, it was in all the hip hop videos and I was excited to drink it

(keep in mind that I was 18 and think back to how excited you were at 18 to be sipping Patron, Moet, Nuvo or even Ciroc). He kept encouraging me to finish my drink and watched me drink which was uncomfortable but I did it anyway.

All of a sudden he started to touch me and I remember saying “what are you doing”. He backed off straight away and looked quite nervous but that didn’t stop him.

He kissed me, and touched me some more but this time I didn’t stop him. I couldn’t stop him and a lot of that had to do with the concoction that he made that he didn’t drink.

So we did it and I vividly remember saying “I wasn’t expecting that”. He put me in an Addison Lee home and that was beginning of Surviving Tim Westwood.

I’d be here forever if I told you every single detail of what happened in those years but thought it was important to set the scene, so that you can understand how he operates. He has a type: young and black.

Funny how he’s never married or had kids and how his taste in women hasn’t changed for at least 40 years. He did say once that he doesn’t want kids because he doesn’t want them to be like him.

Anyway, I used to pass out a lot when I met with Tim and I didn’t understand why at the time. There was numerous occasions where I couldn’t remember us having sex. He’d say things like “you remind me of a ragdoll”. I only realised when I got out of that “relationship”

that I was drugged and raped on many occasions. Why did I go back? He had a hold on me. I thought I was in love and didn’t see any of this as rape at the time.

Tim is very manipulative and when things didn’t go his way, he’d often give me silent treatment until he got what he wanted. I was scared of doing anything wrong so I just endured the abuse. I thought it was normal.

I have so many stories but I’ll cut this short and finish with one that started to wake me up towards the end. One night I went to his Central London flat and we had weed brownies (we ate these together but of course he gave me more than I should’ve had).

I was completely out of it and couldn’t remember anything. I complained of being sick and dizzy. It must’ve been around 6am, he decided to drive me home intoxicated, both of us were intoxicated.

I guess he didn’t want to deal with me so thought he’d drop me home in the state I was in. When I got home I collapsed in my bathroom and just missed the sink. My parents panicked and tried to take me to hospital but I refused as I was scared.

It was only in 2019 that I told my mum what happened. She was so upset that I didn’t tell her but very supportive. We had a long chat about counselling and going to the police. I’m even tearing up writing this right now. This incident happened in 2015 by the way.

I hope my story encourages more women to come forward. Whilst this isn’t an account of everything that happened, I just want you to know that there’s healing in speaking out about things.

There were more stories from others… 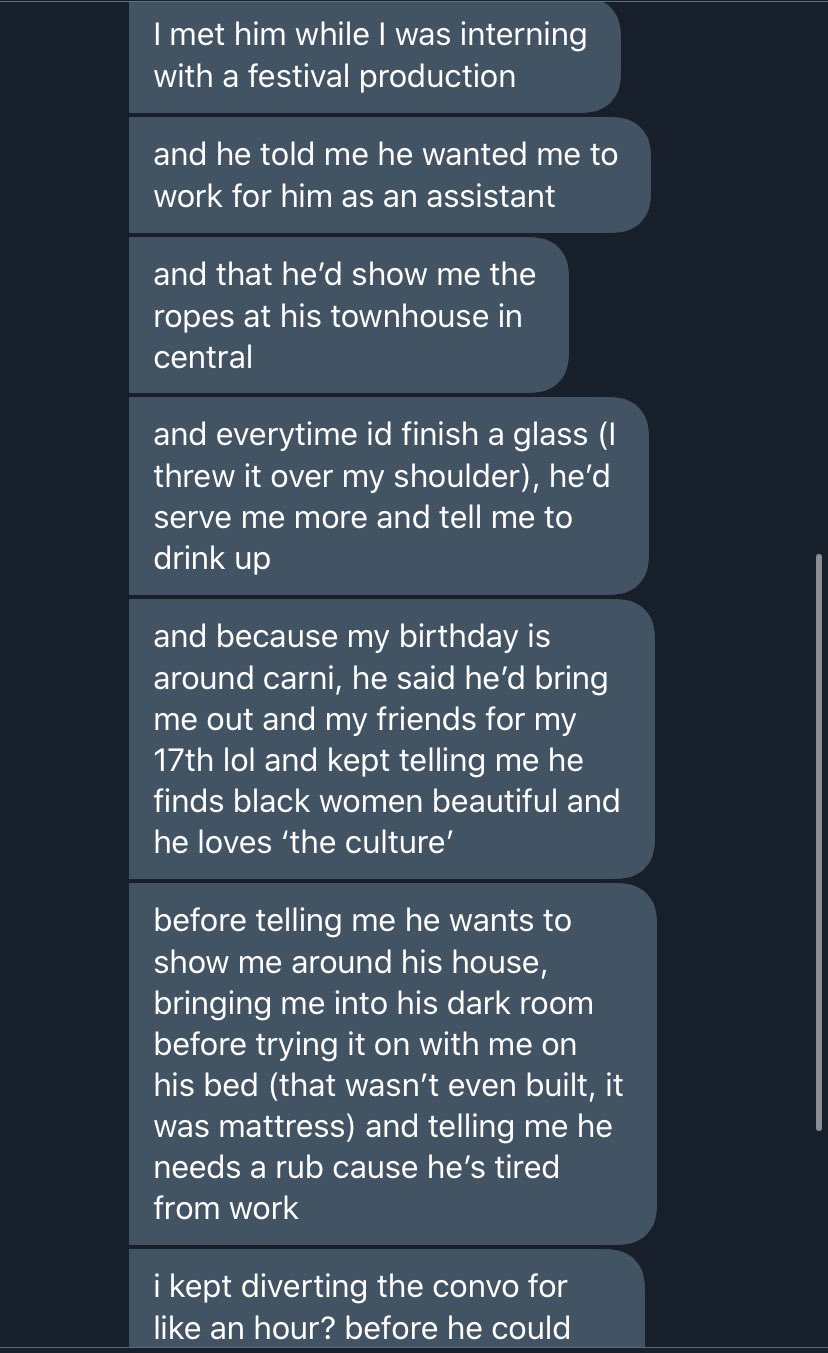 This man is disgusting I’ll never forget when he came to my student union took numbers for his party, & texted all the young black women asking if they wanted to come to his hotel for an after party 🤢🤢🤢🤢🤢🤢🤢🤢 https://t.co/uXQZPj5CZJ

Tim Westwood, the ultimate muddaskunt🤢🤢🤢He called my friend over by NAME, and then prooceeded to ask if she was ready to go to his hotel. My friend realised in that moment how right I was. I never went to one of his perverted parties again. He’s an absolute tramp! 🤢

When I was 19 invited me and a friend backstage for drinks (free booze as a student; yayy), locked the door (my friend and I were like 👀) invited me to his hotel room then tried to kiss me. I leant so far back like Neo in the Matrix then ran out! Thank God I was with my friend

I met tim westwood on a night out in my first year of uni. I was CLEARLY drunk and told him I was. The things he was saying doing was so off. Whole thing was so weird.

Found the pic too dark to make anyone out in. So I’ve upped the exposure (hope you don’t mind)
Fuck Tim Westwood, dirty bastard.
Love and healing to you ❤️ pic.twitter.com/MOgiKBmocG

I remember when Tim Westwood came to Brunel to DJ and he was saying soooooo much inappropriate stuff over the mic which I won’t even repeat. It made me feel sooo uncomfortable

I’ll never forget Westwood entering my kitchen at uni after banging my flatmate. Disturbing my morning cereal with his face

Shockingly, Capital XTRA which hosts Tim Westwood’s show has blocked the Surviving Tim Westwood account, even though she’s never tagged them or communicated with them directly:

I’ve not tweeted or mentioned them once and they’ve blocked me. The media are enablers. pic.twitter.com/kpYhPfIY0t

The fact Tim Westwood likes to get young black fans drunk and sleep with them is apparently one of the worst kept secrets in the industry. It just never got taken seriously until now. There are a lot of people online justifying his behaviour and pointing out this is all happening between consenting adults (as far as what can be proven), so legally Tim Westwood may be in the clear. But just because he isn’t necessarily doing something illegal, doesn’t mean it isn’t weird and creepy. At best this is a 62-year-old man, respected and popular in his industry, using his fame and influence to sleep with 18-year-old uni students. There’s something not quite morally upright about that.

For what it’s worth, Tim Westwood has denied any allegations of relationships with girls under 18 (via MailOnline):

I can categorically say that I have never had an inappropriate relationship with anyone under the age of 18.

I am aware of attempts by anonymous sources to make fabricated allegations online. I can confirm that such allegations are false and without any foundation.

You can catch up on the rest of the Tim Westwood student sex stories HERE.