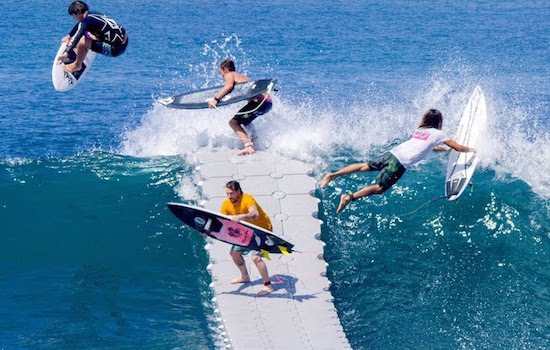 I’m not a surfer, but I’ve been told that one of the most annoying things about it is paddling out into the water to get started.

Stab magazine looked at this problem and decided to do something, setting up the device that they’re calling ‘The Dock’. Here’s what they had to say about it:

Anchoring a 100 foot half tonne plastic raft in the middle of a surf break is no easy feat. At four am we were up, towing out what’s now known as “The Dock” in Bali for this concept shoot.

We asked ourselves, what does the future look like? A cashless society? Self-driving cars? We’ll leave the wavepools for Kelly Slater and co.

Instead, we envisioned lineup where you don’t have to paddle. Which turns out to be a rather dangerous affair. Everything about it was dangerous.

Was it worth it? The video below is five and a half minutes long but you only need to watch the first 30 seconds to see that the answer is a resounding yes. Absolutely spectacular stuff here:

That looks like so much fun doesn’t it? Wish I could surf and was anywhere near as good as any of those guys, although Stab were definitely right about it being dangerous – some of those waves absolutely annihilate everyone standing on it. If you catch them right though, they absolutely kill it.

For more of the same, check out this guy getting his leg snapped in half by a 55 foot giant wave. Yeowch.