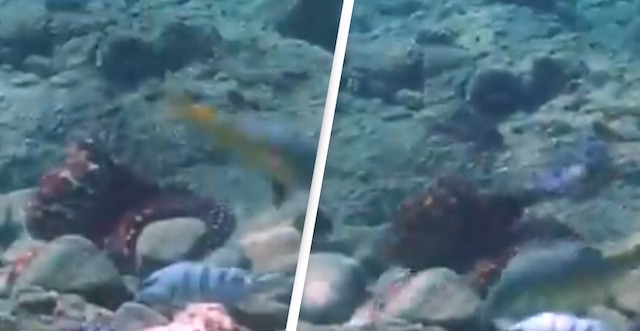 I think this year we’ve probably learned way less useless information than in previous years because the headlines have been dominated by Coronavirus and our various reactions to that, but thankfully the ‘Ecology’ journal has decided to rectify this by revealing that octopuses regularly punch fishes in their faces and released the footage to back this up as well.

Researchers at the Marine and Environmental Sciences Centre from the University of Lisbon made the discovery with biologist Eduardo Sampaio explaining that this often occurred when octopuses and fish teamed up to go hunting together. What?

Octopuses and fishes are known to hunt together, taking advantage of the other’s morphology and hunting strategy. Since multiple partners join, this creates a complex network where investment and pay-off can be unbalanced, giving rise to partner control mechanisms. @SimonGingins pic.twitter.com/MEyyaIZaxO

Octopuses and fish are known to hunt together so they can take advantage of each other’s morphology and hunting strategy.

Multiple creatures often join in on a hunt creating a complex network where investment and pay-off can be unbalanced, giving rise to partner control mechanisms.

This leads to directed explosive arm movements on the part of the octopus, usually to keep the fish away from the prey, keep it in line or to get rid of one that isn’t contributing to the hunt.

Sometime though, there is no real reason for an octopus to punch a fish, indicating that punching is a spiteful behaviour, used to impose a cost on the fish.

It could also be a form of aggression against a misbehaving fish.

Way to make something really interesting insanely boring guys – why do you have to call a punch an ‘explosive arm movement’? Or invent phrases like ‘partner contr ol mechanisms’? Would be way more fun if you just said punching, right?

Anyway, I guess it’s kind of fun that we’ve seen octopuses punch fishes but I imagine that most of us will probably have forgotten about it by this time next year. Can you tell it’s the end of the year and we’re running out of stuff to write about?

For more of the same, check out this octopus crawl inside a diver’s mouth and crawl around. Creepy.