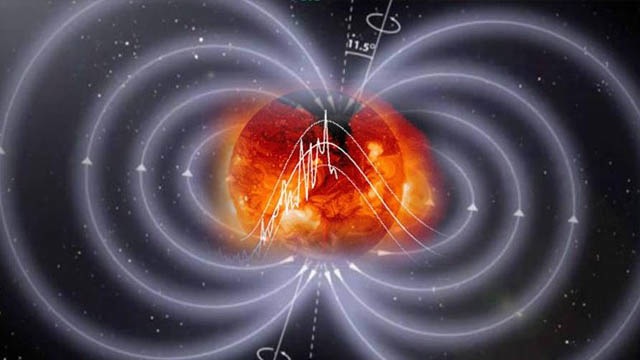 At some point in the next 3 weeks, the sun’s magnetic field will reverse polarity and cause the sun to flip upside down.

The sun’s magnetic field will reverse polarity at some point within the next 3 weeks, causing the sun to flip upside down and send a ripple effect that will extend well outside our solar system.

“It’s not a catastrophic event, it’s a large scale event that has some real implications, but it’s not something we need to worry about,” said Todd Hoeksema, director of the Wilcox Solar Observatory.

The flip— which occurs every 11 years — and the fact the sun reverses polarity is not entirely understood by scientists but they’ll be keeping a close eye on how it goes down. All they know is that the flip is the result of intense magnetic activity known as sunspots moving toward the northern and southern poles of the sun.

â˜› Up Next: Town In Norway Uses Artificial Sun To Light Up 5-Month Night