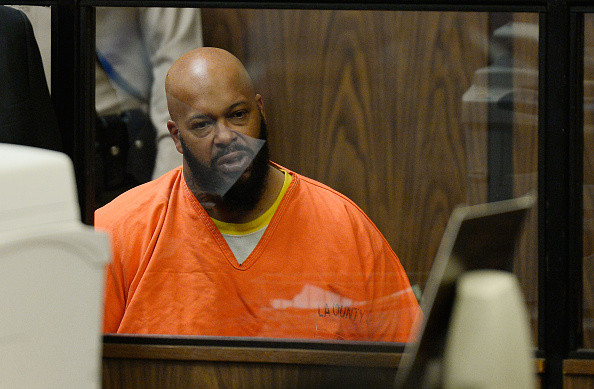 It’s a well known fact that Suge Knight ran someone over and killed them a couple of years ago and that he also plead no contest to this charge and will soon be sentenced to 27 years in jail shortly, but has anyone ever thought to ask just why he ran this person over in the first place?

If you assumed that it was because of some kind of gangster rap beef then you would be correct. Suge is claiming in the interview below – conducted whilst he was in jail over the last couple of days – that Dr. Dre hired people to kill him and they were trying to do so when he ran over Terry Carter and Cle “Bone” Sloan at Tam’s Burgers on that fateful day.

There’s no denying the fact that Dre and Suge had beef – anyone who’s seen Straight Outta Compton would know that – but the more recent beef goes a bit deeper than that. Knight claims that Dre signed a life management contract with him that entitles Knight to 30% of all his earnings in the entertainment business. Obviously, Dre became a billionaire after the Beats deal, so Knight wants a piece of that and Dre is desperate not to pay him – hence hiring the hitmen. Classic gangster rap beefs.

You can listen to the interview below but trust me it’s a bit of a doozy and all over the place so you might wanna sit down and make sure you’re strapped in for it. I quoted the relevant bits below it as well:

They also got the paper trail with all the checks and proof of when they talked to the witnesses saying that Dre came to them first and asked the two guys how much it cost to get rid of me.

That’s when they start coming up with prices.

So when they gave me an attorney, he seen me two times in eight months and told me he went to the court and said he needed help and other attorneys.

And they told him no. He said no way he can do my trial because he really don’t know the case and he won’t win.

So if somebody stacks the deck against you, to the point where they’re not trying to fight for you, and let you get the attorneys you wish to have, what can you do?

I mean I dunno who to believe here. It doesn’t seem outside the realms of possibility that Dre may have paid hitmen to kill Suge, but it seems a bit extra considering he’s a billionaire living the high life and doing whatever the hell he wants now. Would it even be so bad for him to pay Suge 30%?

I dunno, these guys are thug life and I’m sure this isn’t the last twist or turn we’ve heard in their stories. Stay tuned.

For more Dr. Dre, check out this old letter he wrote to his girlfriend. Dirty bugger.