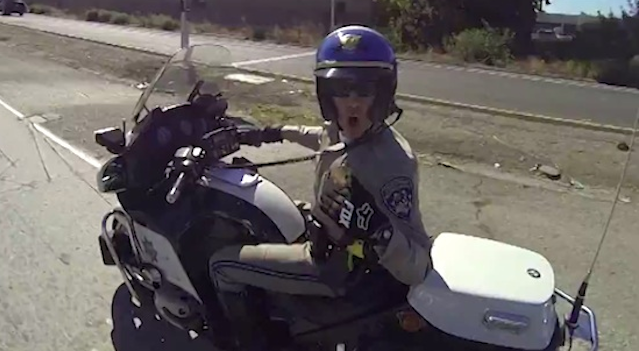 Great to see this cop get put in his place so emphatically.

Stunt racers burning out cops is nothing new but what is news is when the racers tell the cops to fuck off and they leave with a whimper which is exactly what happens in this video.

It’s from the stunt crew Guru sports and a bunch of them are popping wheelies and burnouts on a highway like it’s no big thing when this square patrolman shows up and desperately tries to stop them messing around. Unfortunately all that happens is he gets told to fuck off, and realising that he has literally no authority in the situation just skulks off like a little bitch.

Although I must admit that stunt racing is dangerous and can cause injuries, it is completely badass so I don’t really care. Admittedly as well this cop did seem like a decent guy trying to do his job, but there are so many cops who are just complete assholes it’s good to see at least one put in his place for once, like when this guy got pranked by a magician who tried to sell him pot and ended up looking even stupider than the guy in the video below.