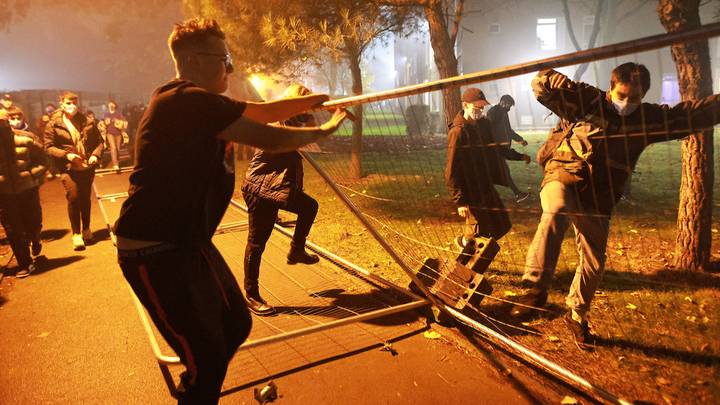 With all the hype currently on the United States election, you might almost have forgotten that we’ve just headed into a second lockdown, although the way that everybody already seems to be flouting the rules you might not have even noticed it had started to be honest.

Up in Manchester, it seems that the student population isn’t happy at all with measures that have been undertaken by the University, who thought that it would be a good idea to erect metal fences outside the halls of residences on its Fallowfield Campus, including Owens Park and Unsworth Park. It was described by the university as a security measure, but hundreds of students gathered to protest against them last night and footage was later shared of them being torn down:

Fences being taken down in fallowfield pic.twitter.com/TzS51Xepjh

Amazingly, the University actually backed down over the fences, agreeing to have them removed by Friday morning. Here’s what the official statement from Professor Dame Nancy Rothwell, President and Vice-Chancellor of the University – said:

I sincerely apologise for the concern and distress caused by the erecting of a fence around our Fallowfield Halls of Residence today.

This was not our intention – in fact quite the reverse.

The fencing was intended as a response to a number of concerns received over recent weeks from staff and students on this site about safety and security; particularly about access by people who are not residents.

There was never any intent to prevent students from entering or exiting the site.

The fences are being taken down from Friday morning and students are being contacted immediately. Alternative security measures, including additional security patrols are being put in place.

I apologise once again for the issues caused by this incident

Yeah I would never have thought that people who are literally trapped in their dorm rooms were going to think that a whole bunch of fences erected outside their buildings were designed to keep other people from entering and it seems like I was proved right yesterday with their response. Very tone deaf action from the university and it seems like their decision only succeeded in making them looking really stupid and probably increasing the infection rate as hundreds of students gathered in one place to protest it. Well done guys!

For more of the same, check out these old dudes trying to fight an electric fence. Definitely the dumbest thing you’ll see today – unless Trump decides to do another speech.