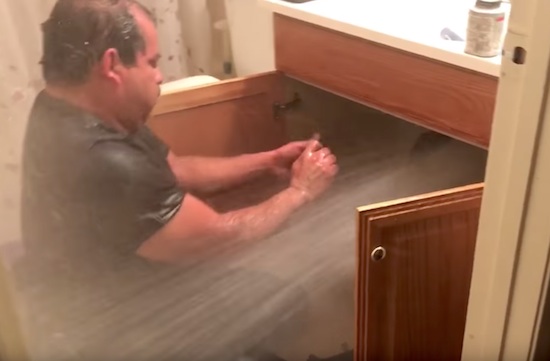 This video is destined to be an all time classic.

Being a plumber is one hell of a serious job because if you screw it up, then it’s going to cause thousands of pounds worth of damage just like that.

That’s exactly the vibe of this video, which looks set to become an all time classic. The gist of it is that the plumber refused to pay the $150 water shut off fee before he started trying to fix the leak at this woman’s apartment. As you might expect, this resulted in absolute disaster as he ended up causing thousands of dollars worth of damage to not just this apartment, but probably also the whole building:

Wow. There is so much going on in that video, even after the guy springs a leak and it goes everywhere at the start. Why does that woman keep vacuuming even though the reservoir is full and it’s not actually helping anything? And why does she have an absolutely ridiculous vacuum cleaner like that in the first place? And why is the plumber so awful at his profession? Everyone involved in this video is an absolute wally. I bet that guy regrets not spending the $150 shut off fee now.

For more plumbers, check out this scaring a plumber prank that goes very badly wrong. Don’t mess with plumbers basically.