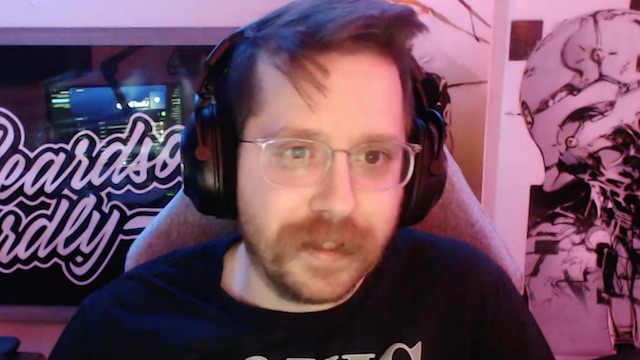 This is an awkward exchange.

I think everyone who has ever watched Louis Theroux knows that he has a very honed interview style that can very easily make the person he’s talking to look like an absolute twat, but usually the people he’s speaking to are the absolute worst so everyone watching him is OK with him acting like that.

Every now and again though someone calls him out on it and sparks fly and this happened just the other day when Louis travelled to interview streamer Beardson Beardly at his house for a new documentary. Unfortunately, the interview didn’t go so well as Beardly threw Louis out of his house after Louis inferred that he was a Nazi because he had been pictured performing a Nazi salute at a military event and was friends with the far right America First Political Action Conference and its founder Nick Fuentes. It’s a fair line of questioning for the guy and Beardy must have known that it was going to come up, so not really sure why he’s getting so excitable about it, but you can never really tell with these weird nut jobs can you?

Anyway, Beardly then jumped on a live stream to explain his version of events and Louis actually ended up calling into it several times to try and continue the interview and explain himself to Beardly. It’s actually a pretty funny exchange if you can be bothered to watch 15 minutes of it, although Beardly is quite clearly some alt right incel weirdo from the way he’s talking and the people that populate his chat:

That was kinda strange and awkward wasn’t it? I’m not really sure why Louis was so desperate to explain himself to Beardson and wanted to finish the interview so badly?

Really weird situation, but you just know that Louis is going to cut it on his documentary to make Beardson look like an unreasonable dickhead. To be fair, there’s definitely something up with him and the people in his chat telling him to ‘shoot the Jew bastard’, so he probably deserves it. Guess we’ll have to wait and see what happens when it drops in a few months.

For more of the same, check out this Louis Theroux bot that actually came up with some pretty awesome documentary ideas. Sweet.