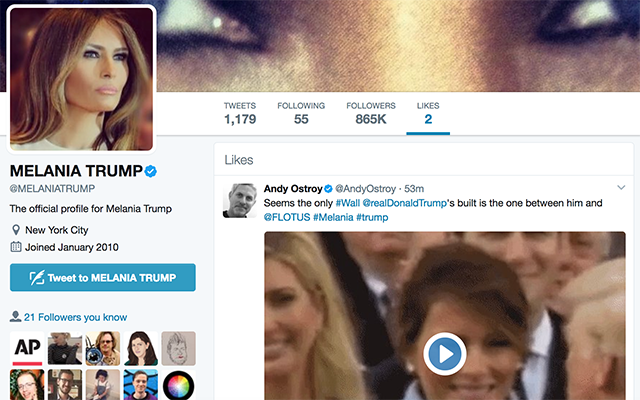 Sending out an SOS.

There has been a lot of speculation over Melania and Donald Trump’s marriage since Trump decided to run for President, with many people claiming that it is all for show.

This debate is not helped by the fact that Melania continues to stay as far away from the White House as possible. It almost seems like she doesn’t want to be around Trump. God knows why… ahem. However, Melania might have finally decided to inadvertently speak out about her current relationship with Trump, or at least send out a secret message that is slightly louder than that “get me out of here” look she has on during public appearances. She decided to favourite a recent tweet from Andy Ostoy about how bullshit their marriage is. It’s even got the video where her expression quickly changes from a grin to a grimace after she spoke to him:

Seems the only #Wall @realDonaldTrump's built is the one between him and @FLOTUS #Melania #trump pic.twitter.com/XiNd2jiLUF

I suspect this isn't a real account for @flotus… pic.twitter.com/ziWXhlHruV

Although he speculated that it wasn’t a real account, many people replied to show that it was the FLOTUS as it had the blue verification tick. The favourite was retracted in less than an hour after Ostroy posted the tweet.

With secret messages like this, and her bizarre and macabre online photo collection, you can’t help but wonder if Melania is trying to tell us something.