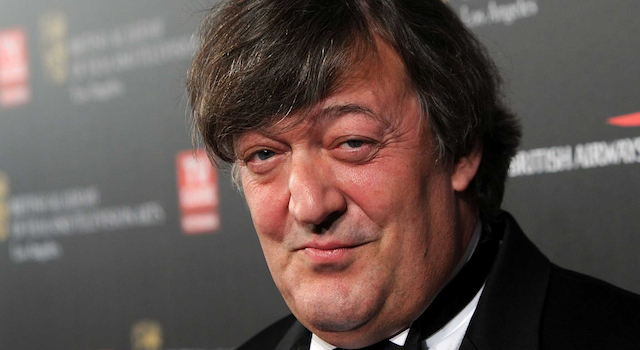 Stephen Fry interviewed a man whose job it is to cure people of homosexuality and didn’t even need to challenge him on his opinions – he just let’s him do the talking because the results and his opinions are completely ridiculous.

Stephen Fry interviewed ex-gay therapist Dr Joseph Nicolosi – who’s correct title is actually Doctor at the National Association for the Research and Therapy of Homosexuals – last night for the BBC Two gay themed show Out There and just let him talk himself into a hole that he had no hope of getting out of. Ever.

Some of the stuff that Nicolosi believes – especially considering as he’s supposed to be a medical doctor of science – are completely unbelievable and ridiculous and based solely on misinformed homophobic bigotry. These include that being gay is ‘based on trauma’ and is strongly rooted to a boy’s father and his inability to provide the three As: ‘attention, affection and approval’. By that logic I suppose that all boys with absentee fathers are going to turn out to be queer, right?

There’s also a great exchange between Fry and one of Nicolosi’s ex patients named Daniel Gonzales – effectively a gay man who has been ‘cured’ of his homosexuality. It goes like this:

‘Fry: Presumably he’s trying to prepare you for a moment where you’re walking on a street and there’s a guy and he gives you a set of tools apparently to deal with that.

Gonzales: Yes, you would ask yourself, “Well what characteristics of that guy do I find most attractive?” And you take those characteristics and say, “Well, what internal faults in myself do those represent?”

Fry: What you’re seeing is a mirror of things you lack.

So again Nicolosi (as these are his methods) sees homosexuality as something of a crutch, and that kids who were traumatised as youngsters by their lack of a father figure go out into the world and actively seek men who possess qualities they feel that they lack so that they can then have sex with them.

Of course. It all makes so much sense now. I always wondered why gay people were how they were and it obviously isn’t anything to do with biology or genetics, nope. I mean a doctor is saying all this stuff, so it must be true. Glad we finally got all that cleared up.

You can watch the interview with another American who must be a time traveler from the 12th century below:

â˜› More Homosexuality: What It’s Like To Be Gay And Live In Russia