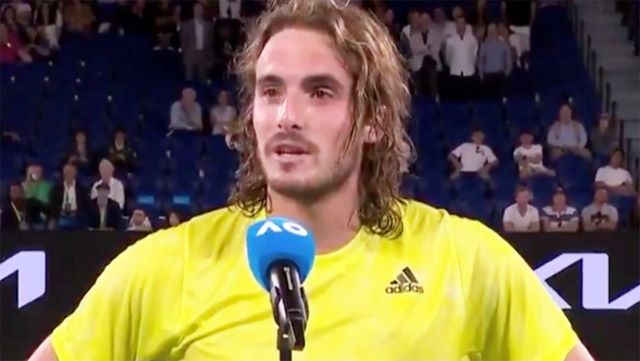 The other night, Greece’s Stefanos Tsitsipas absolutely destroyed opponent Giles Simon in the first round of the Aussie Open. The match was over in an hour and half and the scoreline demonstrated that 36-year-old Giles was simply no match for the 22-year-old Greek.

After the match, Stefanos was interviewed on court by Jim Courier, who simply asked if Stefanos was surprised by the scoreline. With no PR training and no reason in his mind to appear humble, Tsitsipas went with the honest truth – that he absolutely dominated his opponent and barely broke a sweat doing so:

Have a listen to one of the strangest post-match interviews with @steftsitsipas. 🇬🇷

Everyone seems to be reporting on this interview as ‘weird’ or ‘awkward’ or like Stefanos screwed up somehow, but isn’t it actually kind of refreshing? I mean he didn’t say anything that was untrue or disrespectful. He’s a young guy speaking his second language and not polished in giving fake scripted answers that keep everyone happy. Why should he be answering questions like some kind of politician and not like a pro athlete who recognises he just whooped his opponent from start to finish? Especially when you’re interviewing him only a couple minutes after doing so. Dude decided to ignore your typical, politically correct sportsman answer and went with the truth instead. Isn’t that something we’d like to see more of in the sporting world?

Well anyway, whatever you think of the guy, there’s no doubt that he knows how to play tennis. Could Stefanos Tsitsipas be a dark horse to win the whole tournament? Worth a punt for sure.

For the time Stefanos hit his dad with a tennis racket and then got told off by his mum on live TV, click HERE. He wasn’t quite as good back then.