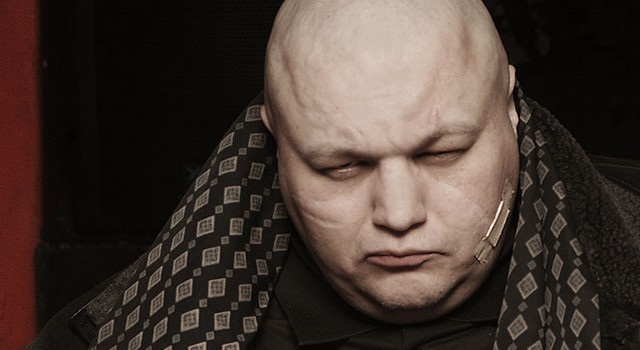 As you probably know, the internet throws up some very interesting things. From the utterly disgusting to the truly beautiful, everything imaginable seems to lurk in its’ unfathomable depths. It’s a perfect representation of the collective human mind, and just like the human mind, there are some unexplainable things lurking in darkened corners.

You can imagine my hesitation then, when a good friend of mine sent me a video with the note “Look into this guy man, he’s fucked up.”

The guy in question turned out to be Ð¡Ñ‚Ð°Ñ Ð‘Ð°Ñ€ÐµÑ†ÐºÐ¸Ð¹ – Stas Baretsky. He’s a musician, and quite an unusual one. At first I thought it was a joke, but then I watched a few videos of him kicking off on various Russian talk shows, attacking other guests. Then I watched a clearly staged video of him attacking some Russian skaters/bad actors, which made me think he was a joke again. The man himself is huge, unbelievably huge, and has a heavily scarred face, as you can see in the picture above. My friend and I discussed at length what the fuck his deal was, and came to no solid conclusions.

According to most of the information I can find on him, he began writing poetry at a young age, and apparently in Russia, poetry is a “Man’s game”. No sickening rants about unrequited love or the beauty of the spring, just harsh, brutal critiques of modern post-industrial life. Drawing from ‘Russian Chanson’ (Russian traditional ballads, which includes a whole sub-genre glorifying violence and crime) Baretsky produces various forms of electronic music. He has worked extensively with the Russian electronic group EU (short for ÐÐ»Ð¾Ñ‡Ð½Ñ‹Ðµ Ð¸Ð³Ñ€ÑƒÑˆÐºÐ¸m, which translates to ‘Christmas Tree Decorations’) and has also collaborated with the Ska-Punk outfit Leningrad, who are often derided for their explicit lyrics, known as Ð¼Ð°Ñ‚ÐµÑ€Ñ‰Ð¸ÌÐ½Ð° (‘Russian mat’, a general term for profanity in some Slavic languages) which seems to fit perfectly with Baretsky’s character.

I probably can’t explain this man fully in words, so here are three videos which I think sum him up in an approximate way. Firstly, here’s a video of him being a fucking nutjob on a Russian chat show:

Next, is one of his music videos. The song is called ‘Money’ and I actually really like it:

Lastly, is a video of an interview, which won’t mean much unless you speak Russian. I only include it to show you the part which begins around 2.46, which is completely at odds with the image portrayed in the rest of his videos:

Basically, I have no real idea of what is going on with this fella. I think he is simply a deliberate shock act, but with a twist that can only come from being Russian, and that’s the point really. He is a perfect representation of the cultural gap between the UK and Russia; He is huge, incomprehensible, a little bit funny and a little bit scary. Either way, I would urge you to do a little research of your own, because he is very definitely interesting.