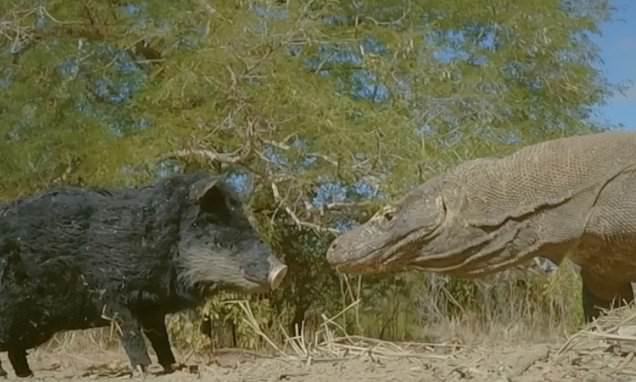 The BBC/PBS show “Spy in the Wild” continues to capture fascinating footage by sending robot cameras disguised as animals into the wild, and this time had one of their ‘spy pigs’ end up on the wrong side of some ferocious, territorial komodo dragons.

The clip starts innocently enough, as the pig films a fight between two males who are eager to mate with the same lucky female. Once the fighting stops but with hormones still running high, things do not end well for the spy pig:

Welp, that only confirms what we already knew – that getting ripped apart and eaten by a 200-pound komodo dragon would absolutely suck. Luckily for the filmmakers the scene did provide them with some never-before-seen footage, as the narrator describes the view inside a dragon’s mouth, “laden with venom and toxic saliva, dosed with up to 50 types of toxic bacteria.” Grim.

RIP spy pig – his sacrifice towards the study of komodo dragons will surely never be forgotten.

For the time a ‘Planet Earth’ cameraman came back to his hotel to find a huge Komodo dragon waiting for him, click HERE. Occupational hazard.